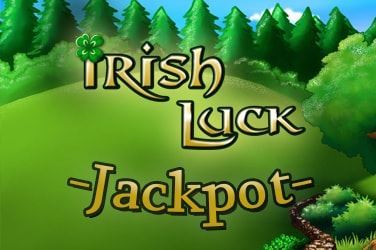 The luck of the Irish theme is popular in slot games at the moment. Eyecon’s Irish Luck Jackpot online slot offers some excellent new features as well as three progressive jackpots to discover. Here we outline the basics of the slot game and see if it’s as lucky as it claims.

Set to a background of emerald green fields and vegetation as well as a rainbow and a little leprechaun, the five reels slot game offer up to 25 paylines, which play from left to right unless you are lucky enough to land a scatter symbol.

The minimum bet of Irish Luck online slot game is just $/€/£0.25 with the betting ceiling being set at $/€/£12.50 per spin, and the Return to Player offered by this game comes in at 89.9%, however, this percentage improves by 3% when you factor in the progressive jackpots in this slot game.

Refreshingly, Eyecon have opted to not include the typical playing card symbols on Irish Luck slot game, so all the symbols and icons in this game have a definite Gaelic flavour. You can expect to find gold coins, toadstools, a Guinness glass, four-leaf clovers, rainbows, leprechauns and more in this game, which gives it a much better look and feel.

The four-leaf clover is the wild symbol of the Irish Luck video slot, and it will substitute all other symbols with the exception of the scatter. However, they only appear on reels 2 and 4, but should they appear on a winning line, they will double the winning amount

The fairy symbol is one of two scatter symbols, and if you trigger between three and five of these you will launch the ‘Match and Win’ bonus feature, whereas landing five scatter symbols in a line will multiply your unit stake 50x to a limit of $/€/£625.

Irish Luck’s Match & Win feature of this slot triggers on three to five fairy symbols on a payline, and you get the chance to choose from a screen littered with four-leaf clovers, which will reveal different multiplier totals up to 100x. Match a pair to win that multiplier amount, which is then added to the winnings from your last spin.

Eyecon have been around since 1997 when they were first formed with the idea of producing computer games. However, in 1999 they decided to switch to designing and marketing online slots games as the market for these began to take off, and they have since released plenty of games onto the market.

The original Irish Luck slot game was released back in 2016, but this later addition comes from 2019 and offers the chance to win potentially huge progressive jackpots.

This is a neat slot game that offers something a little bit different from other Gaelic themed slots games, and the progressive slots give you the chance to win some sizeable payouts.

Our vision of the ultimate online casino experience is taking place here on Las Vegas Casino. We don’t compromise the gaming experience and that’s why we have the best selection of online slot games available to play and review, approaching ourselves to the glamorous experience of land-based casinos.