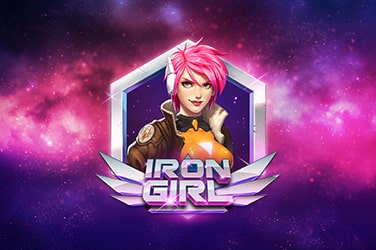 Win multipliers, an RTP rate of 96.7% and re-spin features make this Iron Girl slot game one where players will want to route for the heroine involved

Playn’ GO have provided bettors at Las Vegas Casino with a manga-style slot game as they have created Iron Girl, their superhero of this title!

The online slot game is set with a rather futuristic setting, as players will find the blue background being something that looks computer generated and something that may appear in the future, whilst the symbols on the paytable have also been given a futuristic feel.

There are playing card icons that have been brilliantly designed, as well as a number of villains that Iron Girl will want to try and defeat and stop from causing damage to the world. The blue villain is the most rewarding when 5 of them appear on the grid.

This Iron Girl slot game is played across a grid of 5 reels and 3 rows, and features 20 paylines that can be used to form winning sequences on.

The gameplay experience is incredibly simple and one that Play’n GO have ensured remains as easy as possible to follow and understand.

There are a number of Iron Girl bonus features that are available in this title, with the Iron Girl symbol being the main trigger for these bonuses!

She initially acts as the slot’s wild icon and can help to complete any winning sequences where possible by substituting in for other regular icons, whilst the highest-paying villain remaining on the reels can also remain in place and provide a re-spin of the reels.

In addition to being the game’s wild, this pink-haired heroine also has the ability to provide bettors with a special power. At random points within the online slot game, she can summon her armour, which will then add an additional extra 5 wilds to the reels!

However, one of the top Iron Girl bonus features actually come via the villains that can appear on the reels. As mentioned, if a villain appears on the grid and is used in a winning combination, then it will provide bettors with a re-spin and if it reappears on another reel in the re-spin feature, then another spin will be made and continue until a villain does not appear.

Furthermore, if 8 of the same villains are collected in the base game, then the Bounty Bonus feature will be triggered, which will then trigger 2 additional wilds and see them be added to the reels for the next spin.

Those who land 10 will see the payout multiplied by 2x, whilst 12 will provide a 3x multiplier with 14 villains leading to a 5x win multiplier!

This Play n’ Go title has a high volatility level and provides players with a return to player (RTP) rate of 96.7%.

This game can be rather rewarding if Las Vegas Casino bettors are able to help out Iron Girl in her quest to protect the world from the villains.

Are you ready to help her out and be justly rewarded for doing so?!