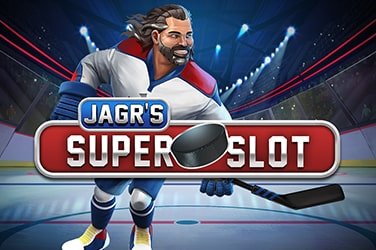 It is possible that not too many people would have heard of Jaromir Jagr, who is a Czech ice hockey player and one of the most famous ones to have played the sport. Jagr’s Super Slot is therefore a tribute to him by Inspired Gaming, and it will certainly help players know more about this player, as well as enjoying the ice hockey theme which has a lot of fun bonuses and features as well.

An ice hockey arena forms the backdrop for this slot game, with fans cheering you on as you play your video slot. The standard card symbols – 9, 10, J, Q, K and A, are the low-value icons, while the high-value symbols are all linked to the ice hockey theme, with an ice skate, a puck with a hockey stick, a helmet, and a foam finger, all showing up on the reels.

Jagr himself also shows up on the reels as the slot’s scatter symbol, in front of two crossed hockey sticks, while his jersey is the game’s wild symbol.

Jagr’s Super Slot is a six reel slot game, with four rows, and up to 4096 paylines. Slot players need to land at least three of the symbols on a payline to pick up wins, except for the foam finger, which gives a 0.5x reward for two symbols. In Jagr’s Super Slot this is also the highest paying symbol, with a 25x win for landing on all six reels, while the lower-paying card symbols will only pay out between 0.4x and 1.25x even if you manage to get six of them on a payline.

There are three potential mini bonuses that can be available in the base game. Wild 68 will see Jagr show up to smash pucks into the reels at random, with the symbols turning into multiplier wilds of 6x or 8x. Jagr Bomb is a variation of this, where Jagr will again smash the reels, and any symbol that is hit twice becomes a multiplier wild. Finally, we have the Bonus Chance feature, where you can win a respin with the reels having more of the scatter symbols, to increase your chances of triggering the bonus game.

Landing three of the scatter symbols will bring up the bonus round, where slot players will have to choose between the Lover and Fighter bonus spin rounds. The Lover round will give the Jagr’s Super Slot player up to 20 free spins, with at least one guaranteed wild with a multiplier of 6x or 8x landing on every spin. The Fighter round, on the other hand, will start with one free spin and a 1x multiplier, but with the chance to increase this up to a maximum of 3 spins and a huge 110x multiplier through the Power Play minigame.

Jagr’s Super Slot Players can place bets from 0.20 credits to 25 credits. Jagr’s Super Slot is a high volatility slot game with an RTP of 95.91%, so players may need to be patient before they see big wins.

If nothing else, this video slot game will certainly make Jagr’s Super Slot players aware about Jaromir Jagr. Fortunately, this online slot has more than enough features and bonuses to make it an entertaining prospect for fans, whether they enjoy ice hockey or not.

Check this and other great video slot game reviews here at the classy Las Vegas Casino.