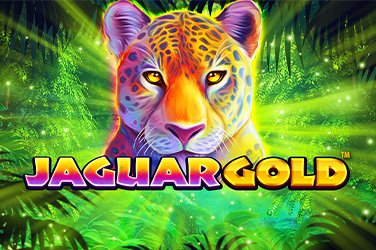 This online slot game from Skywind has a very beautiful theme and visual scheme, with players being taken into the jungle where they can have a lot of fun with bonuses and extras that can add a lot of booty to their winning pile as well.

Jaguar Gold begins in a majestic manner, with a jaguar being shown guarding the slot game’s title deep in the rainforest, surrounded by tall green trees and bushes all around. The background for the reels is also the rainforest, with a lot of leaves, bushes and trees around to make you feel as if you are in the middle of the jungle. Along with the standard card symbols, slot game players will see toucans, antelopes, tree frogs, gorillas and the jaguar itself on the reels, while the soundtrack also features bird and animal noises regularly to further reinforce the sense that you are deep in the jungle.

Jaguar Gold video slot game has 5 reels, 3 rows and 25 paylines, where players need to land at least three matching symbols on a payline to pick up a win. The Jaguar is the slot’s Wild, and along with the gorilla, pays out the highest rewards in the base game, providing a prize of 20x for five of the symbols on a payline. A jungle stream is the Scatter symbol, and helps to trigger the Free Spins round.

There are 2 jackpots available in the Jaguar Gold slot as well, as we will see later.

Landing the scatter symbol on reels 1, 3 and 5 in the same spin will trigger the free spins round. Here, video slot players receive five free spins, where the three middle reels turn into one giant reel which as a Mega symbol. This increases your chances of winning big in this round, which can be retriggered indefinitely as long as you land three scatters again in the same way.

There is also a Jumbo Links bonus game in Jaguar Gold slot, which can be seen on other Skywind games as well. This round is triggered by landing at least six of the diamond scatters on the reels. All of these diamonds will then lock into place before you receive three respins, where all the reels are now covered by either diamonds, or blank spaces. In Jaguar Gold slot, Landing a diamond anywhere during these respins will lock it into place as well, and reset the respin counter back to three. In this manner, you can potentially fill the entire grid with diamonds, which is when the round ends, or when you run out of respins. Each diamond has a numerical value, while some may also have Mini or Major jackpots, that award 30x and 100x of your stake respectively. At the end of the round, the value of all the diamonds and jackpots is added up and applied as a multiplier to your stake, while if you managed to cover the entire reel, you will also get Jaguar Gold’s Mega Slot Jackpot which is worth 1000x of the bet.

Jaguar Gold video slot players can place bets of 0.25 credits and up to 250 credits per spin on this game. This is a high volatility online casino game with an RTP of 96%.

Jaguar Gold uses an interesting theme to draw Las Vegas Casino players in, while the Jumbo Links bonus game can really provide some huge wins, so this is an excellent game that should have fans hooked for a long time.