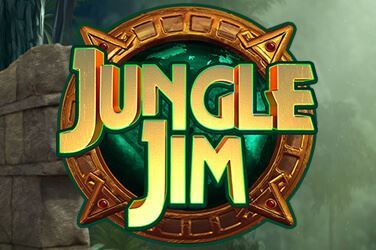 It is perhaps no surprise to find that the legend of the lost city of El Dorado, like that of Atlantis, has proven to be the inspiration for many popular online slots, including this high-profile jungle-themed game, Jungle Jim,  from long-established game developer Microgaming. It is one of many Microgaming slots to feature in the comprehensive Las Vegas Casino’s roster of slots titles.

Admittedly, this online slot game has a passing resemblance to the famous Gonzo’s Quest slot title, but in this case, the hero is a distinctive character, Jim, who swings through the jungle looking for treasure.

The layout of the Jungle Jim slot game is a traditional 5-reel and 3-row grid, with 25 paylines, but the reels are transparent, which means that you can appreciate more of the graphical effort that has gone into depicting the wild jungle here. The big and bold symbols of the Jungle Jim online slot make for a pleasing visual effect and this has to rate as one of the most attractive games that Microgaming have yet produced.

Stakes can be set as low as £/€/$0.25 or as high as £/€/$25 per spin, and the Jungle Jim video slot game features the player-friendly Rolling Reels mechanic in which symbols that form part of a winning combination are removed from the Jungle Jim game reels and new icons take their place, potentially leading to some big wins.

The base game of Jungle Jim slot also has an excellent Multiplier Trail feature. The first win offers a x1 multiplier, but that number rises with each consecutive rolling win, up to a maximum of x5.

The symbols of the Jungle Jim slot game are suitably mysterious and jungle themed. On the reels, you will see gems of various colours, along with a snake, a treasure chest, a flute and an Aztec statue. In the Jungle Jim slot game, payouts range from x2 up to an impressive x120 if you can line up five of the treasure chests. The Wild symbol can also boost your winning chances, by substituting any of the standard symbols.

Jungle Jim is a medium volatility slot game with an excellent RTP of 96.31% which is further boosted by the Multiplier Trail and the Rolling Reels feature in the base game.

Besides the Rolling Reels, the other main feature in the Jungle Jim slot game is a bonus round of Free Spins, which is launched by the Scatter symbol. This game symbol is in the form of an Aztec icon and lands on the first three reels. If you can bring up three of these game symbols, you will earn 10 Free Spins, and these are further enhanced by an extra x5 payout to boost your prize.

Another boost to the Jungle Jim slot game player in the bonus round comes with an upgrade to the Multiplier Trail. This is a popular game feature during the base game but it reaches a new level in the Free Spins round. In this part of the Jungle Jim slot game, the Multiplier Trai increases in increments of three, rather than one and can potentially get all the way up to x15 at the maximum.

Jungle Jim Eldorado slot is one of the best jungle-themed slots around, and although it essentially has only one bonus feature, the base game is value for plenty of entertainment and winning action.

Find more of the best slot games like Jungle Jim in our selection of online casino slots and table games are here at Las Vegas Casino. Put your tuxedo on and walk through our casino pages in the comfort of your home but the same excitement of Vegas.