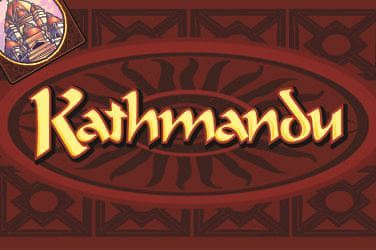 With up to 15 free spins, a gamble feature and an RTP rate of 96.29%, this Kathmandu online video slot game might just have everything needed!

Kathmandu is known for being the capital of Nepal, but Microgaming has managed to take the city and use it as a source of inspiration for one of their top online video slot games.

The game features a backdrop that can be considered to take some of the culture provided by the region as it is rather decorative. The symbols available on the paytable, though, help to bring the theme to life further.

Although the traditional standard playing cards have been utilised, these are followed by icons such as sacks of local produce, towering palaces, a map, an elephant herd, a temple that could be representing the Taj Mahal, a bell and a golden artefact which are all worth significantly more than the cards.

Microgaming is known for providing some of the best gameplay experiences, which is why it is no surprise that this Kathmandu slot game is as easy to play as it is.

The playing grid is one of the key aspects in ensuring this happens and with 5 reels and 3 rows available, as well as the 9 paylines, it is evident that Las Vegas Casino bettors will be able to enjoy themselves with this slot.

A host of Kathmandu bonus features can be activated in this online video slot, with a number of special icons available to try and land in order to trigger the games.

For instance, the golden artefact is the game’s wild and whilst this can be the most valuable icon on the grid when five of them appear on a payline, it can also help to form additional winning combinations by substituting for all regular icons on the grid.

Furthermore, an extra wild will also appear during the free spins game, with this being depicted as the temple icon. This will also be able to substitute for all regular icons and help to form additional wins.

If these Kathmandu bonus features were not enough, there is also a gamble feature that will appear after each winning spin, giving players the chance to double or even quadruple their winnings. However, if they are unsuccessful in predicting the outcome at any point, they will lose whatever was won on the spin!

This Kathmandu slot also provides Las Vegas Casino bettors with a return to player (RTP) rate of 96.29%, which has to be considered to be a rather nice level!

With the bonus features available and the high RTP rate, this Kathmandu online slot game from Microgaming can provide bettors with a truly rewarding experience without having to go all the way to Nepal!