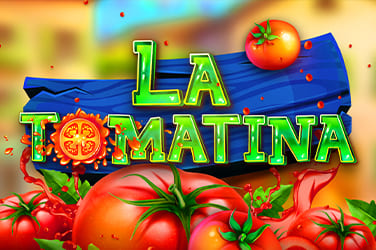 Las Vegas Casino players will be able to get their passports out for this game as they will be taken to a small town called Bunol in Valencia, Spain, as they take part in the Tomatina festival.

Whilst the festival traditionally takes place in August, this Tom Horn Gaming title remains red all year and allows players to enjoy all of the tomato-throwing fun that they can have with help from Sergio and Fernando.

This La Tomatina slot game takes place at a market stall, with the game’s background showing a wooden structure on which the playing grid is located, as well as a plethora of tomatoes that can be found along the bottom of the screen.

The paytable of this game features the traditional royal playing cards in a range of cool colours, whilst these are then followed by items such as traditional Spanish icons like castanets, guitars, fans and hats. These are followed by two different red tomatoes (one riper than the other) which both act as the game’s wilds.

La Tomatina is played on a playing grid that consists of 5 reels and 4 rows, thus making it rather easy to follow and enjoy for players who may not have been exposed to many video slot games in the past.

In addition, the 40 paylines that are available to form winning combinations of three or more identical symbols on are all fixed, therefore players can simply spin the reels and not worry about too much else!

There might not be too much better in life than being able to throw tomatoes around, but when you add the fact that there are a number of La Tomatina bonus features in this Tom Horn Gaming title, then things will get a whole lot better in an instant!

The first of the bonuses is the ‘Flux Spins’ bonus, which comes courtesy of Fernando. He will throw tomatoes at the reels on occasion and when he does, they will become wild icons. They will be normal wilds in the base game, but in the free spins game, these icons will become 2x multipliers! These tomatoes will move down a spot with each spin until they completely disappear.

Don’t forget about Sergio, though, as he also gets in on the act in this La Tomatina online slot. He will activate the ‘Sticky Respin’ feature when he throws tomatoes at the playing grid, as they will lock into place and lock the reels until the end of the feature. The number of respins will depend on how many tomatoes are on the reels, whilst these icons will turn into a wild with a 1x multiplier in the base game, or a wild and 2x multiplier in free spins!

In order to trigger the ‘Free Spins’ game, players will need all positions in the Sticky Respins feature to be filled with tomato icons. Players will have two options where they will choose either Fernando or Sergio. Each game will provide 10 free spins, but they will then get the bonus feature that each of the boys provides, as well.

A minimum bet of €/£/$0.40 is required to be placed in order to play this La Tomatina slot game, whilst a maximum bet of €/£/$80 is also possible to be wagered on each spin.

The return to player (RTP) rate of 95.05% has been set by Tom Horn Gaming, whilst the volatility level is of a medium rate.

Although the fun might all be virtual, there is still plenty to be had about his extraordinary online slot game from Tom Horn Gaming, as this La Tomatina title has the ability to keep bettors on their toes given the number of bonus features on offer!

If you want to join in with Sergio and Fernando in throwing tomatoes at a market stall, then play this game now!