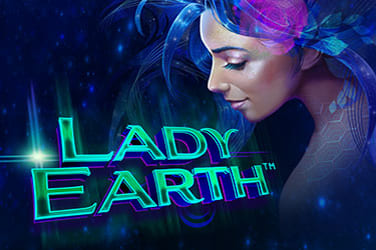 A potentially highly-rewarding bonus feature will make this Lady Earth slot game one that needs to be played as soon as possible!

Lady Earth slot game has been designed beautifully and provides bettors who play this game with an element of mystique as the visuals create an alluring effect.

The game features a background that would suggest it is taking place away from the Earth as it appears to take place within the stars, whilst there is the lady herself looking down on the playing grid to the left-hand side.

In addition, the symbols utilised on the playing grid are exceptionally well-designed, as well, as they have each been provided with plenty of detail. On the paytable, there are a number of different stones that feature different symbols.

This Lady Earth slot game features 51 paylines, although a Cluster Pays mechanic may appear to be in play as bettors who play this game being required to land 5 identical symbols from the 1st reel in order to receive a payout, as well as a free re-spin that will turn these symbols into another one that may trigger another payout!

The playing grid features a layout that consists of a 5×5 shape, thus making the gameplay experience as effective as possible.

As mentioned, one of the Lady Earth bonus features available in this game is the Re-Spin feature that will be triggered whenever a winning combination is hit.

This feature will continue to take place as long as a winning combination is obtained and can go on to provide a number of exceptional prizes!

Players who are able to land 3 of the scatter icons – which are depicted as the Lady Earth character designed by Microgaming and Crazy Tooth Studios – they will then trigger the main Lady Earth bonus feature.

Here, players will play a pick-’em style game where they will need to try and complete the puzzle that has been put in front of them without picking up three skulls along the way. There are a total of 9 levels in which can be progressed, with tiles consisting of skulls, instant prizes or the puzzle piece.

Players who complete each puzzle successfully will see that their overall prize pot will be increased by a win multiplier of either 2x, 3x or 4x before moving onto the next level. This will continue until a total of 3 skulls are collected, in which the Lady Earth bonus feature will then come to an end.

A minimum bet of €/£/$0.20 per round is possible to wager on this Lady Earth slot game, although the developers have made it possible for bettors to play with a maximum bet of €/£/$300 with each spin, which can provide some serious rewards!

96.80% has been set as the return to player (RTP) rate for this slot, with a medium variance level also adopted.

We can not stress how rewarding this game can be when players are able to land the Lady Earth bonus features on offer, as wins can be of a serious amount if they are lucky enough to trigger the pick-em game!

Indeed, the RTP rate of 96.80% is also incredibly attractive, thus making this game one that needs to be played!