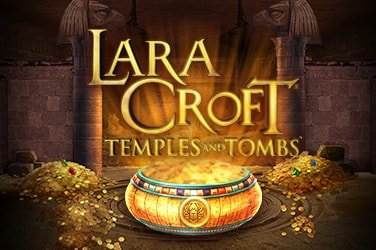 Lara Croft – Temples and Tombs is a high volatility video slot, with a grid format of 5 reels x 3 rows. The slot game is loaded with 243 paylines and was brought by Microgaming through Triple Edge Studios, that sees the popular badass heroine return to desktop and mobile screens for the third time. With a bet range of 0.20 to 100.0, a jackpot of 5,000x your stake and an RTP of 96,05%, this is the best Lara Croft slot game yet and it is a firm favourite with players from the UK.

True to its Egyptian treasure hunt base theme, the video slot symbols on the reels include a rope and grappling hook, a medical satchel, a torch, and a water bottle. These are the lower-paying symbols. The higher payers of Temples And Tombs slot game include statues of Egyptian gods, and four images of Lara – full-face, on a motorbike, in mid-jump, and firing a gun. The full-face is the highest payer of all. If you land 5, it is worth 10x your stake.

The video slot’s Wild is a gold coin on which is embossed the image of a Scarab Beetle. It only appears on reels 2, 3, and 4. As per usual, the Wild substitutes for all other symbols except the Scatter.

The Scatter is the Book of Secrets. When you land 3 or more, you will be awarded between 8 and 32 Free Spins. Just underneath the reels, you will see a string of Multipliers. The Lara Croft: Temples And Tombs slot game’s Free Spin feature begins with 3x and each consecutive win earns you more, up to a maximum of 15. You can retrigger this feature with 3 more Scatters and earn another 8 Free Spins. You can gain a maximum of 48 additional Free Spins in this manner.

The game’s Wild is the key to activating bonus features. When you land a win, the Rolling Reels feature springs into action. The winning symbols of Temples And Tombs slot game vanish and are replaced by other symbols which tumble into place. Any Wilds migrate to the golden jackpot pot dish sat above the game’s reels. The more Wilds you collect, the better the chance of activating one of the game’s 3 jackpots.

Temples and Tombs online slot game also has a Multiplier sequence that can grow with every rolling reel. Starting at 1x, it will increase with each win when new symbols appear, increasing to 2x, 3x and 5x if the Rolling Reels carry on.

Microgaming is one of the biggest names in the online casino industry. Having developed the first real online casino software 26 years ago, and the first mobile casino software 16 years ago, they are still pioneering innovations. Their collaboration with Triple Edge Studios, who produced Lara Croft – Temples And Tombs slot game – is evidence of a new trend in the use of small specialist studios to breathe new life into the gaming world.

This latest Lara Croft adventure comes 16 years after Microgaming first brought this character into the online casino world. The new design studio and the use of modern technology such as rolling reels, bring Ms Croft up to date at the cutting edge of the iGaming world. The soundtrack of the video slot is mysterious and fitting, and teases you with expectation.

Earlier Lara Croft slot games were fun to play. Temples and Tombs game takes the enjoyment factor to new heights. All UK online casinos offering this slot are UKGC approved, so safe secure gambling is assured. It is a high volatility slot game, but with an RTP of 96.05%, pay-outs of up to 7,343x your stake and a jackpot of 5000x, it is well worth your attention.

The most popular online casino games are available at Las Vegas Casino. Our pursuit to provide you the best experience is a never ending project to find in our slot games page.

Let us know your evaluation of Lara Croft: Temple And Tombs slot game.