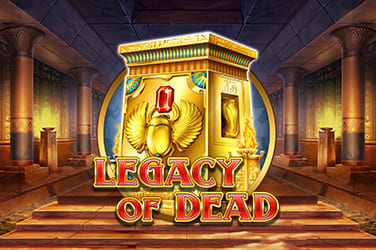 Legacy of Dead features up to 42 free spins and stacked random icons as players will find an RTP rate of 96.58%.

Play’n GO have adopted the ancient Egyptian theme with this Legacy of Dead videoslot, with the genre has been incredibly popular with players at Las Vegas Casino.

The game’s background features a number of exceptional visuals and graphics, with players feeling completely immersed in the experience that is being provided by the developer as they find themselves in an environment that would be found inside a temple.

There are a number of Egyptian symbols available on the paytable of this game, as well, with players able to find each of them having been designed with the gold colour that is synonymous with the era.

There are the traditional royal playing card icons, which are then followed by a number of figures that would be found in the time period, including the Tutankhamen which is worth the biggest prizes.

A burial chamber icon is also available in this Legacy of Dead game, with it having some significant importance as it is the game’s wild and scatter icons.

This Legacy of Dead slot game is played on a rather traditional and familiar playing grid, as players will find that there are a total of 5 reels and 3 rows in which the icons are able to land in the hope of providing players with the riches associated with ancient Egypt.

There are a total of 10 paylines available in this game, which makes the gameplay experience one that is rather easy to follow and enjoy.

As mentioned, the burial chamber icon is highly important in this game, with it being the wild and the scatter icon.

Therefore, the best Legacy of Dead bonuses features is available to be triggered when this icon makes an appearance on the reels.

Those that find it anywhere on the grid will see it be able to form a substitution for regular icons where possible to help form a winning sequence and reward a payout, but those players who are fortunate enough to land three or more of them will find that they can trigger the free spins game.

In this game, players will receive 8 free spins in which one random icon will be selected to appear as stacks. If this icon appears anywhere on the reels, it will expand and fill the entire reel and provide some big rewards if involved in a completed winning sequence!

Keep landing 3 or more scatters during the bonus round and players can expect to re-trigger the bonus up to 42 spins! With a different expanding symbol being chosen on each re-trigger.

The return to player (RTP) rate for this Legacy of Dead slot game is 96.58% and features a high volatility level.

Las Vegas Casino players will be able to play this game with a minimum bet of just €/£/$0.20 per spin, although those that like to wager bigger amounts will enjoy the fact that up to €/£/$100 per spin can be placed as a maximum bet.

Legacy of Dead slot game from Play’n GO will provide players with a top ancient Egyptian slot game and one that is rather easy and enjoyable to play.

Those that are successful on this journey could potentially be able to win some rather lucrative rewards, whilst the bonuses will mean these wins could be amongst the biggest possible.