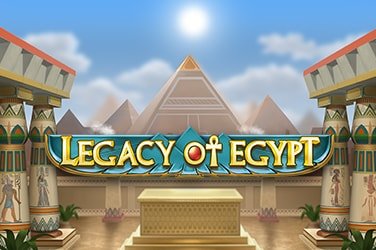 Legacy of Egypt video slot from Play’n Go is a 30 payline, 5-reel slot game that can be played on various devices, so you can play at home on your desktop or on your tablet or smartphone. The stakes range from $/€/£0.30 to $/€/£90 for each spin, so there is something for both the hardened gambler and the casual gamer. Legacy Of Egypt slot game proffers a Return to Player (RTP) of 96.5%, with a house edge of 3.5% and comes with a free spins feature that also comes with a 10 times multiplier.

When it comes to appearance, Play’n Go have not held back with outstanding high-definition graphics and animations on their slot games. In addition to the customary playing cards from Jack to Ace, there are other symbols in the guise of Egyptian leaders and gods.

Many of the gods you may have heard of before include Ra the sun god, Sobek the god of crocodiles, Anubis the god of the dead and Sekhmet the goddess of fire, war, sun, plagues and healing. The Egyptian Pharaoh who was the most powerful person in ancient Egypt, and Cleopatra the queen of the Nile are also immortalised as symbols in this game.

Unsurprisingly, being the most principal person in ancient Egypt, the Pharaoh icon is the most valued as it gives you 10 times your unit stake for five across any payline on Legacy Of Egypt slot game. The wild symbol here is the scarab, and it will substitute for all other symbols except for the pyramid, which is the scatter icon. The scarab icon will also pay you 16.66 times your unit stake if you get five on any payline.

Three or more pyramid scatter symbols will activate a bonus feature called ‘The Wheel of the Gods’ that will give you the chance to spin the wheel and obtain either 3, 10, 15 or 20 spins for free. When you begin using your free spins, the game will randomly apply a multiplier to every spin, and these range in value from 2x, 3x, 5x, 8x or 10x. Three or more of the scatter symbols, and you will reactivate the slot game’s bonus feature where you could potentially win up to an additional 20 free spins, and there is no set limit to just how many free spins you can be awarded in total.

Get two wild scatters on any free spin and this will trigger an additional bonus feature known as Pyramid Spins, which comes with a 10x multiplier. In addition to which, The Wheel of the Gods then spins, and you will collect extra Pyramid Spins ranging from three to eight.

Legacy of Egypt slot game is an entertaining slot game that will give you prospective payouts of a maximum of 5,000 times your unit stake, and with every free Pyramid spin should you get a 10 times multiplier added. So, with any luck, you can channel the force of ancient Egypt and the pyramids and earn big wins on Play’n Go’s latest Egyptian theme-based video slot game.

If the Legacy Of Egypt slot game is exactly what you wanted you may find other top slot games here at Las Vegas Casino.