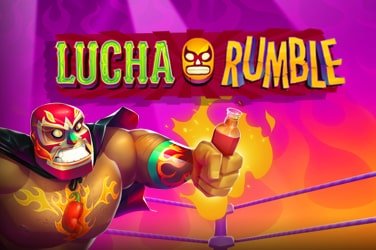 The game picks up on a very popular theme, at least in some parts of the world, in Mexican wrestling. We have all seen videos of masked wrestlers performing crazy stunts in the ring, and it is this experience that the Lucha Rumble slot game from Eyecon is trying to replicate.

Anybody who has ever seen these wrestling matches will know that the wrestlers themselves show up in bright and colourful outfits, and so that is the case for the Lucha Rumble slot game as well. It has an extremely bright and bold colour scheme, which is over the top but perfectly suits the theme, while there are five ‘luchadores’ (wrestlers) who show up on the reels.

Each of them have larger than life costumes, with bright colours and fancy masks, while other Latin American stereotypical icons, such as hot sauce, pinatas and Mayan treasure chests are also on the reels.

The Lucha Rumble slot reels themselves are on a stage, with flood lights beaming down upon theme, and one of the coolest things about the visuals is the animations that take place, with the wrestlers taking each other on in fights whenever there are winning combinations. This makes of the Lucha Rumble one of the best looking video slot games out there, especially in the Mexican wrestling theme.

The game has 5 reels and 4 rows, with 1024 ways to win. Winning combinations have to be on the slot reels from left to right, with three or more identical symbols needed to provide a win.

The Wild symbol in Lucha Rumble slot game, which is the champion’s belt, will appear only on reels 2, 3 and 4, substituting for all other symbols except the Scatter, while winning combinations that include the game’s Wild will have either a 2x or 3x multiplier for every Wild, so you can have higher multipliers as well.

The Lucha Rumble video slot game symbol is the Scatter, which can help trigger the bonus free spins round.

Landing gold symbols on the first and last reels of the video slot game triggered the Bonus Prize Feature.

After the Bonus Prize feature is activated, you will see a battle take place between wrestlers, with a random multiplier being awarded as a prize at the end. This can be 2x, 3x, 5x, 10x or 100x of your bet.

Landing three or more of the Scatters in the base game of Lucha Rumble will bring up the free spins round. Here, you get 10, 20 or 25 free spins for 3, 4 or 5 scatter symbols respectively, while this round can be retriggered up to 15 times, thus giving players the potential of having as many as 400 free spins.

Lucha Rumble slot game is definitely one of the best looking video slots out there, with an offbeat theme and brilliant animations. The small range of bets and low volatility mean that this is more suited for newcomers to online slots, who will really enjoy this game and the Mexican madness that takes place on the reels.

If you liked the Lucha Rumble slot game then you might want to try other amazing popular online slots with the ultimate online casino experience from Las Vegas Casino.