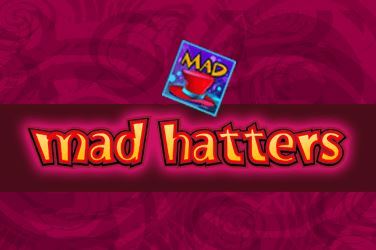 You’d be mad not to play this Mad Hatters online video slot game from Microgaming, especially when up to 50 re-triggerable free spins are available to win!

Perhaps loosely based on Alice in Wonderland, Microgaming have taken one of the characters from the novel and provided players with a game that focuses on the Mad Hatter.

The game features a number of elements that can be associated with the classic, although each of them have been designed expertly well and with a touch of colour that is impactful and vibrant as soon as the game loads.

Whilst the playing grid sits on a background that consists of purple, the game’s overall backdrop has red applied to it, whilst each of the paytable symbols have been designed in a fun and funky way.

The icons used all feature things that may have been found at the tea party that the Mad Hatter was found, with various cakes and teas making up many of the icons that can be found on the grid. These are also followed by three different individuals that are depicted in hats.

There are a total of 30 paylines available in this Mad Hatters online video slot game, with each of the lines being fixed on each spin that is made.

Microgaming, though, have kept things incredibly simple in regards to gameplay as the grid consists of 5 reels and 3 rows.

With a number of Mad Hatters bonus features available to trigger, there is a huge amount of fun to be had by Las Vegas Casino players who decide to give this game a spin.

The first is via a wild icon, which is a Top Hat and this can appear on each of the reels available, however, they can appear differently on one set of reels. For instance, whilst they will appear as single items on four of the reels, those that land on the centre one (reel 3) will appear as stacks of three. In addition, they can help to form additional wins by substituting for all regular icons and helping to complete chains.

Players who are able to land 3 of the Cuckoo Clocks on the reels will be able to trigger the ‘Pick ‘em’ Mad Hatters bonus feature, with players need to choose one of three options to win an instant reward that includes up to 11,100 credits!

Bettors who are able to land three or more of the Bunny in the Hat symbols (the game’s scatter icon) will trigger the best Mad Hatters bonus feature, though, as they will receive a number of free spins.

Three scatters will award 10 free spins, whilst four and five will trigger 25 or 50 free spins! Furthermore, an additional wild icon can appear in this bonus game whilst each win is doubled in size!

Microgaming has provided a return to player (RTP) rate of 96.08% for this slot game, but with a low volatility level, wins can be rather frequent.

A game that features huge numbers of free spins, stacked wilds and ‘Pick ‘em’ style games should always be played and Mad Hatters online slot game from Microgaming is not an exception to the rule.

This is a quality title and one that is incredibly enjoyable to play, whilst it can also make Las Vegas Casino players feel justly rewarded, given that there is a low volatility level attached to it.