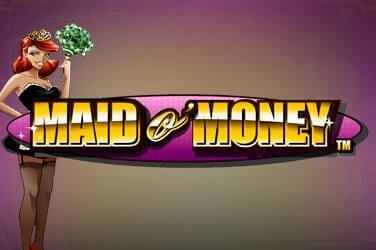 This online slot is incredibly rewarding as players will find up to 10 free spins and various bonus features that can be triggered as they help the maid clean up after guests!

The NextGen Gaming’s online video slot game provides Las Vegas Casino players with a title that will instantly wow them when they first load it up as they will be met with a number of bright, vibrant colours that could make bettors feel as though they are taking part in a game show.

The game features a number of expertly drawn symbols, as they look to help the maid become a wealthy person and potentially help her to quit the job that she is doing to support herself.

The paytable features a number of different icons that can each be collected and used to form winning combinations, with the traditional standard playing card numbers all being available to start things off.

These are then followed by a vacuum that can be spotted sucking up cash, a cash-rich duster, a golden tiara, and a pair of expensive red heels that would have to be considered extremely pricey to buy!

The slot game is played on a grid that consists of 5 reels and 3 rows and consists of a total of 25 paylines.

Maid o Money slot players will not have to play with all 25, though, as these are adjustable so those wishing to play with as few as 1 or as many as they wish can make the choice and not be limited in their options.

A host of Maid O Money bonus features are available to trigger in this game that all have the potential to make it incredibly rewarding for players who decide to try and help the maid out.

The first of the features that may be noticed is in regards to the maid, as she has the potential to go wild. When she does, players will be able to win a reward when as few as 2 of her appear on the grid, although those that land 5 will obtain the biggest prize of all.

However, those that are able to find the bags full of money will build the cashpot up that will then be available to win when 3 of these symbols appear on the playing grid in a single spin. Players who trigger the ‘Cashpot Feature’ will be rewarded with 10 free spins that will see all wins be doubled, as they aim to obtain the accrued amount. In addition, those that land a bag on reel 5 will see those prizes be boosted further!

The last Maid O Money bonus feature is random and can happen after any spin that is made. This will see players be awarded with a choice of three features that they can look to trigger: Roaming Wild, Money Wheel, Cash Ladder.

• Roaming Wild – extra wilds will be added to boost prizes.
• Money Wheel – this will provide the maid with further opportunities to win
• Cash Ladder – coins will be dropped by the maid that can be collected in order to climb the cash ladder, with those getting as far as possible being able to win big rewards!

Players are able to help the maid out in this Maid O Money slot game with a minimum bet of €/£/$0.01 per line that is active, whilst a maximum bet of €/£/$50 is possible in order to obtain the biggest riches that are on offer.