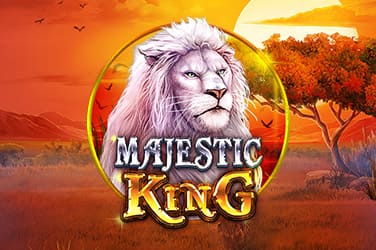 This slot online provides up to 40 free spins and double symbols, thus making it potentially lucrative!

A trip to the African Savanna is what Las Vegas Casino players will receive when they give Spinomenal’s Majestic King online slot game a spin.

The game’s theme features a vibrant orange background that can easily be associated with the theme of the game, whilst the symbols have also been provided in an excellent way, as well.

The paytable features a range of different icons including the standard playing card values, as well as a number of different animals that can be found within the region. These include zebras, giraffes, vultures and elephants.

It is important to note that this game will see the symbols appear in two forms, with singles and doubles both potentially landing on the reels. If a double icon lands, it will count as two single icons which means prizes can be rather plentiful.

The Majestic King video online slot game consists of a playing grid that follows a formation that is rather traditional.

There are a total of 5 reels and 3 rows, whilst there are a cool 25 different paylines available to form winning combinations on. Each of the paylines remains active with each spin made, as they are fixed.

A plethora of Majestic King bonus features exists in this game from Spinomenal, which will be a huge positive for Las Vegas Casino players who are looking to try and find a game that can potentially provide them with some great rewards.

Many of these Majestic King bonus features are available via the special symbols that can be found on the grid. The game’s wild, which is represented by the lion icon that features the word ‘wild’, can substitute for any of the regular paying icons on the playing grid but only counts as one icon, although it can appear stacked. In addition, anyone who manages to land 5 of a kind will win a prize worth 200x the bet!

Another Majestic King bonus feature is the free spins round that can be triggered in the base game via the scatter icon that is depicted as the game’s logo.

Majestic King slot game players who land a minimum of 3 of these icons will win between 10-40 free spins which will be determined on a wheel, whilst one of the animal icons will appear as a double throughout the bonus.

Las Vegas Casino players who manage to land 3 or more of the tree icons will trigger the bonus game that is available. This game will provide players with 3 spins to begin with, where they will need to try and fill the meter to the left with as many scatter icons as possible.

The more scatters collected, the bigger wins possible. There are scatters that appear with ‘+1 spins’ and when these are collected, an additional spin will be awarded.

The ‘Buy Feature’ is the final Majestic King bonus feature available in this game, with players able to trigger the free spins round for a cost that is determined by the bet wished to be wagered.

A minimum bet of €/£/$0.10 is possible to play with per spin taken, whilst Las Vegas Casino players are able to place a maximum bet of up to €/£/$100 on each spin they wish to make.

The return to player (RTP) rate for this Majestic King slot game is 96%.

With so many great bonus features available, Majestic King slot game is a top title and one that needs to be enjoyed by players here immediately!