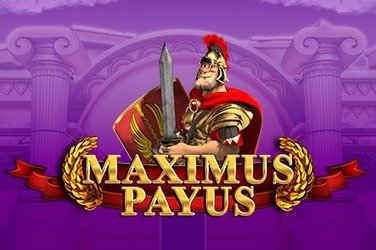 Maximus Payus slot game has been provided by Inspired Gaming and Las Vegas Casino players are going to need to armour up for this gladiator theme game as it will hit them hard.

By hitting hard, we mean that this Maximus Payus slot game packs a punch, as there are a wide range of different bonus features available, as well as the potential to win from over 1,024 different paylines.

There are a lot of Roman-themed slot games, yet Maximus Payus does truly stand out as one of the best. The visuals of this game have an extraordinary style and players will feel as though they have found a cartoon-style animated film of the warriors. Maximus Payus has a genuine feeling of character about him and is continually ready to assist the player to get those best payouts possible in this slot game.

The game’s icons truly help to convey the ancient Roman theme that Inspired Gaming have looked to apply. The icons include things such as the Coliseum, a chariot, a legionary, swords and a helmet, whilst the traditional card icons that have been used by many slots continue to make an appearance.

Maximus Payus slot game comes equipped with a playing grid that consists of 5 reels and 4 rows, with a total of over 1,024 different paylines available to form a winning combination on. Players will need to just match 3 icons to form a winning combination from the left-most reel, although those that manage to trigger a combination of 4 will provide them with a four-reel bonus. This slot game can be played across a number of different portable devices, as this game has been made fully compatible with a number of mobile devices.

Inspired Gaming have provided players with a significant number of bonus features in this Maximus Payus slot game, including things such as ‘Wild Cards’, ‘Expanding Symbols’ and ‘Substitution’ icons.
The main icon of this slot game, though, is Maximus Payus himself, as he can help during the ‘Free Spins’ bonus game. He can provide bettors with up to 20 free spins, or he can use the ‘Fortune’ move to increase the bet placed by 50% and boost the potential winnings.

The gold wreath is the Wild Card and this can substitute for all icons on the playing grid and help form a winning combination where possible. The Eagle icon is the scatter and this can help reels to spin faster and more likely to provide a win. Landing 3 or more of these will also trigger the ‘Free Spins’ and ‘Fortune’ bet games.

The return to player (RTP) rate for this Maximus Payus slot game by Inspired Gaming is 95%, which can be considered rather respectable. The game has a volatility level that sits between medium and high, whilst bettors are able to place a minimum of €/£/$0.30 and a maximum of €/£/$90 on each spin of the reels that they take.

Maximus Payus slot game is a top ancient Roman-themed slot game and could be argued to be one of the best to have ever been produced using this genre. With a good RTP rate and a decent number of bonus features available, players will be able to go into battle knowing that they have a good chance of landing some rather lucrative rewards.
Check this and other great online casino games at Las Vegas Casino