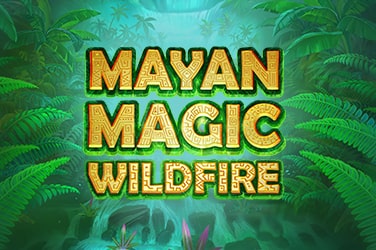 Pays Both Ways mechanics, synchronised reels and sticky wilds all await players who give this Mayan Magic Wildfire videoslot a spin at Las Vegas Casino!

As the name suggests, Mayan Magic Wildfire slot game will provide Las Vegas Casino players with an adventure that will see them be taken to a jungle setting that has been designed magnificently.

The background features some rich imagery as players will feel fully immersed in the gameplay provided, as the backdrop features plenty of green and blues, as the jungle can evidently be seen.

Furthermore, the paytable of this game provides players with a number of different icons that can be associated with the theme adopted by NoLimit City, as there are brilliantly designed jewels, as well as snakes, ocelots, Shaman, a King and a Queen who will pay the biggest rewards when five appear on a payline.

Speaking of paylines, there are a total of 10 that are available in this Mayan Magic Wildfire slot game, with each of them being fixed for each spin that takes place on the playing grid that consists of a total of 5 reels and 3 rows. It should be noted, though, that these paylines are essentially doubled as the game features a Pays Both Ways mechanic.

There are a number of customisable options, though, that can be utilised by players, with buttons located in the corners of the game screen that can be easily accessed.

There is only one real Mayan Magic Wildfire bonus to speak of, although it is one that NoLimit City have made sure bettors at Las Vegas Casino can enjoy when they play this particular video slot.

The game is called the ‘Mystery Sync’ bonus and this can happen randomly on any spin that may take place. When this bonus feature has been triggered, players will find that reels, 2, 3 and 4 (the middle reels) will be synchronised together and each row across the three reels will each show the same icons all the way along.

The reels that have not been synchronised – reels 1 and 5 – will then continue to be spun and if reel 1 or 5 lands with a matching symbol, then wins could be rather lucrative, although players will hope both reel 1 and reel 5 show identical icons that match those in the middle to earn the biggest possible rewards!

Other Mayan Magic Wildfire bonus features available in this game include the wild icon that can appear on the centre reels. The centre position of reel 3 will become sticky if it appears and will trigger a re-spin. Any further wilds that appear will see another re-spin awarded, whilst a third wild will see a multiplier applied that can increase with additional wilds appearing.

There is a mystery wild that can also appear at random throughout the game, as well. This icon will appear in the centre of the reel and when it lands, the icon that appears there will be turned wild as will any of the matching icons available on reels 2, 3 and 4!

The return to player (RTP) rate for this Mayan Magic Wildfire slot game is 96.04% and comes with a medium level of variance that Las Vegas Casino players will be able to enjoy.

Players who undertake this adventure will be pleased with what they experience, especially if they are able to trigger the Mayan Magic Wildfire bonuses that are available to trigger.