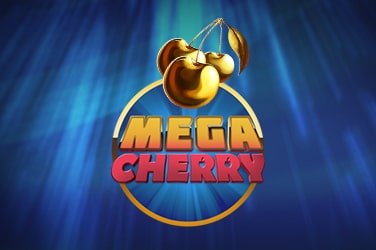 Inspired Gaming is a highly respected online casino software developer, and many of their titles appear in the impressive Las Vegas Casino online roster, including Mega Cherry, a retro-themed slots game with the emphasis on speed and simplicity. It’s a stripped-down title that won’t appeal to everyone, but has a pace and rigour that slot purists will appreciate.

Inspired has opted here for a retro fruit machine look, with a basic five-reel and three-row layout, featuring 10 fixed paylines. In Mega Cherry slot game the focus is clearly on the reels, as there is a minimalist background of plain blue, supported by a pleasant but unmemorable soundtrack.

To the left of the screen is the stake menu, and here you can bet to a range that runs from 0.1 to 60, while the slot game itself can be played in auto or manual mode and although it has a retro feel, it is adapted to run well on most mobile devices and operating systems.

In Mega Cherry slot game is an old fashioned looking slot and there are some familiar symbols on the reels. Here you will see plums, watermelons, oranges, grapes, strawberries and blackberries, which represent the lower value symbols. In the mid-ranking range are the white, blue and red Sevens, which can pay up to x100 your original stake if you can line up five of a kind.

You should also look out for the white cherries, which have a specific payout amount on them. While these can form winning lines during the base game, they come into their own when playing the bonus game. The highest payout of all in the basic game comes with the Mega Cherry Logo, which can give you x200 your stake if you bring up five on a payline. In fact, hitting five of a kind in the base game here does offer solid value. The RTP is 96.5%, which is above average.

It is fair to say that Mega Cherry slot is not a feature-packed slot game, but it does have two handy bonus features that add to the gameplay.

The first Bonus feature in Mega Cherry is the Cash Collector Bonus. If you can land six of the white cherries, along with the Bonus icon, the Cash Collector Bonus will be triggered, as well as 5 Free Spins. During this bonus, the cherry symbols are locked while all the other positions spin. The only new symbols in Mega Cherry slot that can land during this bonus are further cherry symbols, golden coins or blank spaces. And, if there are any new cherry symbols that turn up during the feature, they are also locked. Finally, if you bring up a golden coin during the bonus game, the cherries turn red and gold, and when the Free Spins end, the cherry values are added to the total you’ve already won.

The other notable feature in Mega Cherry slot game is the Spin Chance. If your balance drops below the current nominated stake, but is more than zero, you will be given a chance to bet the remainder of the balance with the chance to win another spin at the existing stake.

This is not a flashy game by any means, and it may be frustrating for those used to a more player-friendly interface, but for those who prefer the old school approach, this is a solid slot title that certainly delivers.

Try this and other great online casino games at Las Vegas Casino.