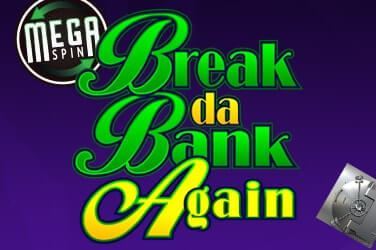 Unique gameplay setups as 4 playing grids are available, as well as free spins and other bonuses, in this Mega Spin – Break Da Bank Again videoslot!

Microgaming has decided to revisit an old title of theirs but has given it an upgrade in a way that will have been surprising to those Las Vegas Casino players who play it for the first time!

The icons available on the paytable of this Mega Spin – Break Da Bank Again slot game include things such as the traditional royal playing cards, gold bars, cash, gold coins, pens and cheques, as well as diamonds, the game’s logo and the vault icon.

When it comes down to the gameplay experience that can be found when playing this Microgaming online slot game, this is where one of the biggest changes comes.

This Mega Spin – Break Da Bank Again slot game features four different playing grids that can be utilised at the same time, with each providing a total of 5 reels and 4 rows, with each of the grids coming with a total of 9 adjustable paylines.

In addition to the fact that there are a number of different playing grids available to play on, there are also a number of great special icons available in this Mega Spin – Break Da Bank Again slot, with each providing some bonuses.

There are wild icons, scatter symbols and free spins games that all are triggered within the Microgaming title.

Players who are able to land the wild icon in this game – which is the game’s logo – will be able to form additional wins where possible as it will be able to substitute for all regular icons available on the paytable when they appear on an active payline. Any wins that are formed will be boosted by a multiplier of 5x in the base game, whilst any win formed in the free spins game will be worth 25x the bet!

The free spins game will be triggered when players are able to land 3 or more of the game’s scatter icons. These icons are depicted as the bank vault door, and landing two or more of these will provide a payout.

However, as mentioned, those that land more than 3 or more will be rewarded with free spins as well as a payout. Those that do will receive either 15, 20, or 25 free spins depending on the number of scatter icons that landed on the grid in that single spin. Additional free spins can be won for each scatter that appears during the Mega Spin – Break Da Bank Again bonus game.

A return to player (RTP) rate of 95.43% has been provided by Microgaming for this Mega Spin – Break Da Bank Again video slot.

This Mega Spin – Break Da Bank Again online video slot game has plenty going on and is one that will appeal to Las Vegas Casino players in a great way. The fact that there are four playing grids being played at the same time can be considered rather unique for a slot game.

In addition, the free spins on offer are incredibly appealing, whilst players will certainly feel as though they have Break Da Bank if they come away with the wins that are on offer!