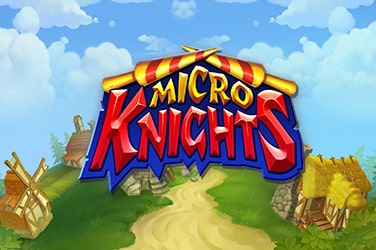 Micro Knights online slot game has been developed by ELK Studios and features some rather fun visuals that can provide Las Vegas Casino players with some great gameplay experiences.

The visuals are rather engaging, as are the game’s symbols as we found out when doing this review by checking out the paytable that this title has to offer.

There are a wide array of different icons available on the playing grid, with each having been designed with a cartoon theme, thus keeping things as fun as possible. These include various objects that can be associated with the theme, as well as animals such as the rabbit, the frog, a ram and a bull.

Las Vegas Casino players who decide to give this Micro Knights online slot game a spin will find that they are greeted by a playing grid that consists of a total of 7 reels and 7 rows, thus providing a total of 49 positions in which the icons can appear. There are no specific paylines available in this game, however, that is down to the fact that it follows a Cluster-Pays mechanic with wins of five or more matching icons landing in a group providing a win.

ELK Studios have packed their Micro Knights online slot game with a number of special bonus games, which will delight Las Vegas Casino players as this can keep them playing for as long as possible with plenty of excitement.

Players will notice that there is a queue of symbols that continue to be added to the meter at the bottom of the screen when the Charging Knight pushes them there. These will be added to the game’s screen in order to create further winning combinations.

Players will be able to trigger the following:

The ‘Free Drops’ game can be triggered when players land three crown symbols and the bonus will be fully charged, thus allowing the Flag Feature to continue to take place!

Indeed, you just have to look at the special Micro Knights online slot game bonus features available to work out whether this video slot is right for you. With so many of them available to trigger, it would be difficult to say that it isn’t, either!