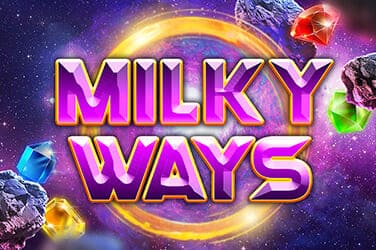 Las Vegas Casino players better get their space gear and equipment ready when they play this Milky Ways videoslot from NoLimit City, as they will be transported to a place far in the galaxy and perhaps in the Milky Way? See what we did there?

As soon as the game loads up, it is evident that the developer has used some extraordinary graphics when creating this game, with an incredibly effective background having been designed and provided.

Players will immediately feel as though they are in space, whilst the icons available on the paytable of this game have also been given some excellent attention when it comes down to the design.

The traditional royal playing card icons have been provided with some neon lighting, whilst these are then followed by various crystals and gems, as well as the game’s logo.

The playing grid might have been created with an element of transparency by NoLimit City for this game, however, Las Vegas Casino players will easily be able to work out that this Milky Ways slot game follows a traditional layout of 5 reels and 3 rows.

The game features a 243 winning ways mechanic, as well, thus keeping things relatively simple and easy to follow and understand.

There are a couple of Milky Ways bonuses that are available in this game for players to take advantage of, with the first being via the ‘Solar Wild’.

This icon is the game’s wild symbol and can only appear on the middle three reels (reels 2, 3, and 4) and has a multiplier of between 1x and 3x that comes with it. If it were to land in more than one position on the same spin, the multipliers will be multiplied together to provide the total prize available.

A couple of spins rounds can also be triggered in this game, with the first of the Milky Ways bonus features being the ‘Milky Ways Spins round’. This is triggered when three bonus icons appear on the middle three reels and when this happens, the playing grid will see an additional two rows be added, thus increasing the potential win ways from 243 to a huge 3,125 ways! Furthermore, each spin will provide players with a guaranteed two wilds.

The ‘Fusion Spins’ bonus game is a feature that is triggered when playing in the Milky Ways free spins bonus. In this game, winning icons will become locked on the grid and the non-winning symbols will be spun again to try and provide a potentially bigger payout!

Players are able to play this Milky Ways slot game with a minimum bet of €/£/$0.20 with each spin, although those that want to experience the biggest rewards that this space adventure has to offer will find that a maximum bet of €/£/$100 can be placed on each spin.

NoLimit City has set the return to player (RTP) rate at 96.14% and have provided the game with a medium volatility level.

This Milky Ways online video slot game will send players on a journey into outer space and will give them everything they need to make it rather rewarding.

The expanding paylines from 243 to 3,125 different ways to win when playing with free spins is exceptional and could make heading to the Milky Way even more rewarding than it would have initially been thought.