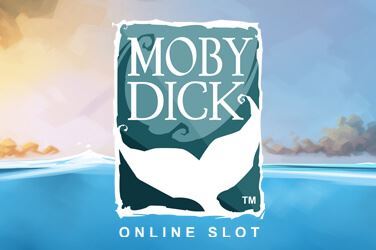 Most, if not everyone, in the world will have heard about the literary classic tale of Moby Dick, but now Las Vegas Casino players will be able to experience the novel in the form of a brilliant slot game.

Microgaming and Rabcat have teamed up and worked together once again to provide this Moby Dick slot game that will see players have to tackle the high seas and the waves that have been provided in the background of this game expertly well.

Indeed, the immersive element created by the visuals is brilliant as always, as players will find a ship in one corner that helps to fit with the story that is well-known.

The paytable of this game also has a number of symbols available on it that can be closely associated with the tale, although the traditional royal playing cards have been used. These have been designed effectively, though, and are followed by a mug, an anchor, Captain Ahab, Moby Dick and a WILD icon that features the ship’s steering wheel.

This Moby Dick online video slot game is easy to play and follow, as it features a layout that will be very familiar to players at Las Vegas Casino or who have played slot games in the past.

Microgaming have adopted a grid that consists of 5 reels and 3 rows, whilst they have also provided bettors who spin the reels of this game with a total of 25 paylines in which they are able to try and form winning combinations on.

There are a couple of different Moby Dick bonus features available in this game, which will help to keep players as keen to hunt Moby Dick as much as Captain Ahab is.

The first is the ‘Frozen Symbols’ feature that can be found in this game, with the bonus being active during the normal gameplay stage. Players who activate it will notice that the symbols will remain in place in the positions that they appeared on after a non-winning spin. A re-spin will then be awarded, which will see the frozen symbols locked in place to try and provide a win. If more matching icons appear on the re-spin, further spins will continue to be made.

The ‘Free Spins’ Moby Dick bonus feature can be triggered when players land three whale icons on the reels in any position. Up to a possible 20 free spins are available, whilst there is also the opportunity to land a multiplier of up to 4x the bet, as well.

The whale icons will then be given the ‘Frozen Symbols’ treatment and remain locked in place, whilst more of them appearing on the subsequent spins will see more re-spins be awarded, or players can look to try and upgrade their bonus round and receive even more free spins.

The return to player (RTP) rate is 96%, which can be considered to be of a standard level and one that Las Vegas Casino players will be happy with. In addition, the medium volatility level that Microgaming and Rabcat have set is also rather standard.

A minimum bet of €/£/$0.25 per spin is required to play this game to its full potential, whilst a maximum bet of €/£/$50 can be used on each spin in this Moby Dick online video slot game!

The classic tale of Moby Dick has been made rewarding for Las Vegas Casino players as Microgaming have provided them with up to 20 free spins and win multipliers that can boost the prizes that are won!