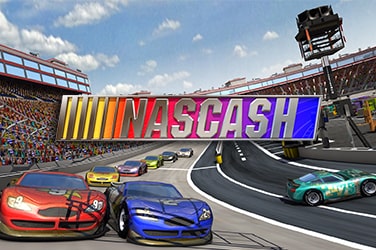 Nascash is a slot game that has been developed by Genii that has clearly taken inspiration from the sport of NASCAR as the visuals represent everything that can be associated with motorsport.

Las Vegas Casino bettors will instantly be greeted by a race track where they will see cars pictured racing against each other as they go around a bend, with the artists providing some cool drawings to help depict the action.

In addition, the symbols available on the paytable of this Nascash slot game also help to represent things that would be spotted at an event, with food, race hats, equipment, tires, helmets, flags, cars, a trophy and a reporter all being featured as the main paying icons.

Genii have made it possible for Las Vegas Casino bettors to enjoy their time at the races as they have adopted a simplistic gameplay approach with this game.

The playing grid consists of a traditional setup as there are 5 reels and 3 rows in which the icons can appear, whilst there is also a total of 25 different paylines available to form winning combinations on.

However, it should be noted that this online slot game can be customised, as the paylines are adjustable. This means bettors can play with as few as one or as many as the full 25 that are on offer via the settings.

There might only be one Nascash bonus feature available in this slot game, however it does come with 3 different variations!

The Nascash bonus feature available is a free spins game, with a number of different free spins available as well as win multipliers. Players who are able to land 5 scatter icons – which is the symbol that has multiple cars racing – will receive the top prize which is the 15 ‘nightride’ free spins that come with a 2x multiplier.

Those that manage to land more scatters during the Nascash bonus feature will be able to retrigger the free spins once again, as well!

Additionally, there is a special symbol in the game, which is the race driver and he is the game’s wild icon; thus being able to substitute for all regular icons on the paytable.

The minimum bet for this Nascash slot game is €/£/$0.01 for those who want to play with the lowest settings possible, whilst the maximum bet of €/£/$25 is also possible for those at Las Vegas Casino to place!

The return to player (RTP) rate is thought to be around 93%, although it is typically unknown.

Despite being a very solid slot game, there isn’t much going on which in a pity. The game relies too much on its free spins feature and unfortunately for Genii that’s not enough nowadays.

It’s almost like something’s missing, but if you are a fan of Nascar, this is a must for you.