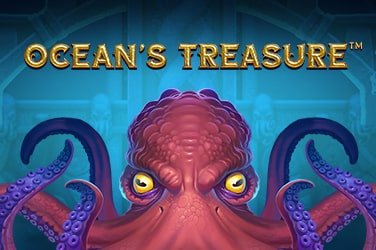 Las Vegas Casino players can prepare to meet the Kraken in this Ocean’s Treasure online slot game from NetEnt, as they are able to uncover a large number of great bonus features and top prize amounts, including a 1500x the bet.

Players will be transported to the depths of the ocean, as they are thrown into various different folklores, as the game provider appears to have mixed a bit of Norse mythology, with some rather ancient Greek legends. However, despite this, the visuals and graphics that have been provided are rather stunning and have to be seen to be believed.

Las Vegas Casino evaluated that the playing grid of Ocean’s Treasure online casino game is set inside what appears to be various shells and statues, whilst a school of fish continue to swim past. In addition, those who are fortunate enough to be able to trigger the special feature will see that the Kraken is rather animated when he appears.

Las Vegas Casino also evaluated that the graphics and visuals used on the icons available in this Ocean’s Treasure online slot game are of the highest order as well, with each of the symbols having been designed expertly to fit the theme that NetEnt have tried to adopt.

By taking a look at the Ocean’s Treasure slot paytable, we found that there are a number of different icons including the traditional playing card values of J, Q, K, and A, as well as what appears to be a treasure key, a compass, a jar with a treasure map inside and, finally, the treasure.

Las Vegas Casino’s slot game features a playing grid consisting of 5 reels and 3 rows and provides players with the ability to win from 15 different paylines.

Players at Las Vegas Casino website are able to also customise their gameplay experience by using the game panel that is provided at the bottom of the playing grid.

The slot game features a ocean’s goddess, which is the stacked wild symbol of this Ocean’s Treasure online slot game, and she can fit three rows high and is able to fill an entire reel, acting as if she can complete other combinations as well. The regular wild icon move in this game is a golden Trident, and it fits in just one position.

As Las Vegas Casino analyzed, Ocean’s Treasure online slot game has the potential to provide players with a number of free games as well that players are able to land.

This game can be activated when they are able to find three or more of the ocean treasure chest scatter icons. This will unleash the ocean’s wildest monster , the Kraken, who will then provide players with 10 free spins.

This Ocean’s Treasure bonus feature can be played over a number of different levels with a win multiplier increasing on each level played and being added to each round. Players will need to fill the level meter up in order to win the biggest prizes, with a maximum of 12x available, should players reach the fifth and final level of this Ocean’s Treasure online slot game.

They will then win a bonus of 1500x the bet, with bets being placed from as little as €/£/$0.15 and going as high as €/£/$300 on each spin that is taken. The Ocean’s Treasure video slot has a return to player (RTP) rate of 96%, which can be considered as rather average across the entire Las Vegas Casino range of titles.

Las Vegas Casino online players will be treated to a rather great deep-sea adventure, when they play this Ocean’s Treasure slot game, and will certainly be able to win a rather big number of wins, when everything goes in their favour and they make the Kraken appear.