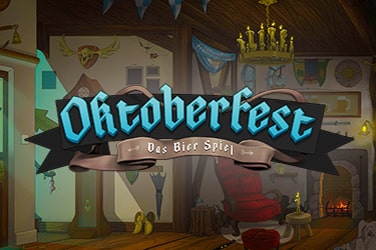 Time to get drinking in this Oktoberfest videoslots, especially if Las Vegas Casino players are able to obtain the free spins, stacked icons and wilds, as well as multipliers in this game!

The first thing that players will know about Oktoberfest is that it is a German theme that celebrates the invention of beer, so it should not come as a surprise that this online slot game follows that tradition,

NoLimit City has provided their Oktoberfest online slot game with some fun visuals that Las Vegas Casino players can enjoy, with a cartoon design having been incorporated.

When taking a look at the paytable of this Oktoberfest online slot game, players will find a number of traditional playing card suit icons, such as the diamonds, hearts, spades and clubs, as well as German items like pretzels, a hat, a beer barrel, two German characters and a wild that features a pint of lager.

This Oktoberfest online slot game has a playing grid that follows a rather traditional format, therefore allowing Las Vegas Casino players to be able to play this game as easily as possible.

There are plenty of special bonus features to have been packed into NoLimit City’s Oktoberfest online slot game, with four different bonuses available to trigger.

The ‘Party Spins’ feature can happen at any random moment on any spin taken and can fill a reel (or multiple reels) with stacked high-value icons.

The ‘Pretzel Party Spin’ game will be triggered randomly as well, with all of the playing royal cards being turned into pretzel wilds for that spin.

The ‘Prost Win Spins’ feature will see Gretchen and Hansel make an appearance and will see them appear as stacked wilds on reels 2 and 4. If they land, a special wild mode will be activated in which the two characters will raise a glass and form a single wild icon on reel 3, with an additional 2 more guaranteed winning spins being provided, as well.

The last bonus is the ‘Bierspins’ feature, which can be triggered when 3 scatters appear on the same spin. Players will receive a total of 10 free spins, whilst collecting more of these icons in the round will see a multiplier of up to 5x being awarded for wins, as well!

The return to player (RTP) rate for this Oktoberfest online slot game from NoLimit City stands at 96.75% and features a volatility rate that can be considered to be of a medium variance.

Oktoberfest is a time for celebration for a number of people around the world and this game will provide Las Vegas Casino players the opportunity to get in on the act, as well! With so many different special bonus features available to trigger, it’s time to say “Cheers!”.