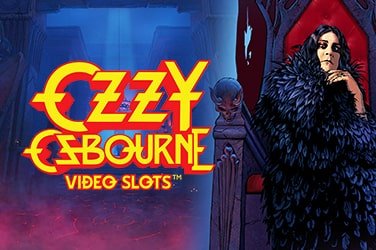 NetEnt’s Ozzy Osbourne slot is a 5-reel, 20 payline game themed around the infamous one-time lead singer of the heavy metal rock band, Black Sabbath. He was known as the “Prince of Darkness,” and the video slot celebrates his career with some wonderful graphics and illustrations, an Ozzy-based soundtrack, and seven-game features as detailed below.

The backdrop of the Ozzy Osbourne slot is a large, dark, gothic cathedral, complete with gargoyles. With symbols such as black crows, crucifixes and skulls, you immediately feel you are in for a serious contest on this slot game. Ravens and roses complete the cast of the lower-paying symbols.

On the Ozzy Osbourne slot game, the different faces of the man himself are the higher payers, with a bat (what else?) being the highest payer as it can give you up to 50x your stake when you land five symbols on the payline.

The Wild in this slot is a red bat. It substitutes for any of the other symbols to give you a boost towards landing winning combos.

The Ozzy video slot is feature-rich. There are, in fact, seven features for the slot gamers to enjoy. If you activate the Bonus Bet feature on Ozzy Osbourne slot game, you will have to double up on the stake. Once you do so, you can win additional free spins and multipliers offering 2x, 3x, 5x, or 7x.

Respins are triggered by the Scatter symbols that appear on reels 1, 3, and 5. In the base game, when you land two scatters at the same time, it will start the Respin feature. It also activates the Charge Up feature of Ozzy Osbourne video slot – see below for more details.

At the upper left of the screen, you will see the Symbol Spinner Box. It determines which symbol will get which feature for the respin.

To the upper right of the screen, you will find the Feature Spinner box. It governs which feature will be applied to the symbol selected for respinning. If the Scatter appears, the bat head will come up. It activates Free Spins after the Respin.

This feature is key to the slot game. The features that can be assigned are as follows:

NetEnt are one of the pioneers of the iGaming industry, having been driving standards ever high in terms of their platform and their game contributions over the last 20 years. They now have offices in Gibraltar, India, Malta, Poland, Sweden, the UK, and the USA, and employ over 1,000 people worldwide.

They have distributed over 200 original games to more than 200 customers, and as at the end of 2019, had handled in excess of 58.3 billion gaming transactions.

Ozzy is, of course, a Brit, and British players in the UK will be pleased to know that the UK Gambling Commission licenses all UK-based online casinos. In other words, they are assured of fair play and can gamble online safely and securely.

Find some of the best branded slot games like the Ozzy Osbourne by NetEnt at Las Vegas Casino and take your best spin on the finest selection of slot games.