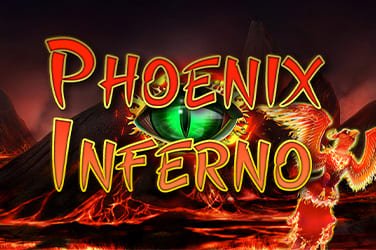 Phoenix Inferno is a slot game 1×2 Gaming launched on 07.04.2021. This online slot takes you to the fiery fantasy homeland of the Phoenix. Play Phoenix inferno and other slot games at the Las Vegas casino.

Phoenix Inferno features a bright and eye-catching concept. The background depicts a burning countryside created by a violent eruption from the volcanic mountains, with a temple devastated by fire. A bird flies high in the sky, evoking feelings of death and sorrow. The theme’s golden and reddish colors bring it out well.

The music is a Chinese theme tune that is occasionally broken by the gong, which mixes wonderfully with the theme to provide the player with a calm environment. The red game menu and gold are conveniently located immediately below the reels. There’s also an auto-play feature that spins your reels when you press the button.

All of the action in the Phoenix Inferno slot takes place on a standard five-reel, three-row layout. The online slot has 243 winning methods and simple gameplay, making it accessible to gamers. As is customary, customize your gaming experience according to your preferences before beginning your quest. Thankfully, the online slot game uses a few controls that are visible on both sides of the reels.

Using the “+” and “-” buttons, click on the Stacked Coins to select a bet value between €0.20 and €20. After choosing an excellent value, you may manually start each game by hitting the Spin button. In this online UK casino game, you can activate Autoplay and customize up to 99 programmed spins for a relaxing experience. Extra choices are available by selecting the three-lined Menu icon on the reels’ left-hand side, including the Information Page, Paytable, History, and advanced settings. QuickSpin, Sound Effects, and Music are just a few of the options available from the latter.

A symbol set of 11 conventional symbols is used in this video slot. The online slot, like most other casino games, divides the icons into low, medium, and high-paying values. Starting with the leftmost reel, the winning methods pay on consecutive reels. Only the highest reward will be paid out along any winning path.

In this online UK casino game, the royal icons represent the lowest-ranking payments: 9s, 10s, Js, Qs, Ks, and As. Landing three of a type will reward you with anywhere from two to 80 coins. The mid-payouts are then produced in progressive order by the Volcanoes, Chimeras, Hellhounds, and Dragons. Getting at least three of the same will earn you from 12 to 140 credits. On the other hand, the Fire Goddess is the most valued regular character. If at least two of her appear on successive reels, she’s worth 200 credits.

Gamblers might expect to capture more of the unique symbols in addition to the top-paying sorceress. For example, the Phoenix, which is the Wild, may be used to substitute any other symbol. On the other hand, the Scatters are the rainbow crystals that activate the extra games.

The bonus section of this Phoenix Inferno isn’t activated, contrary to most players’ assumptions. As a result, people looking for a range of extra modes and functions in this casino game will be disappointed. Nonetheless, there is plenty to keep you occupied while playing this online slot game. You’ll get 65, 70, or 75 stacked Phoenix wilds on all reels except the first when you match three, four, or five Scatters.

The primary feature offered is the Phoenix Inferno free spins mode. To activate 8, 12, or 16 free games, you’ll need at least three special Scatters anywhere on the reels. Landing four or five Scattered Crystals also removes up to two of the lowest-value playing cards.

Managing up to five Scatters throughout the bonus spins round will retrigger four, six, or eight extra games. The online slot game will also eliminate the lowest-paying royal emblems once more. As a result, with just premium icons dominating the action, landing a more profitable winning combination is significantly more straightforward.