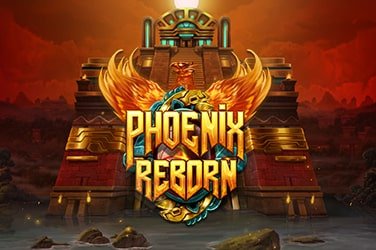 Phoenix Reborn, from Play’N Go, uses a mythical theme, with a phoenix at the centre of the game, along with Aztec influences, to create a mysterious and mystical slot game with exciting features and bonuses that will keep players engaged.

Phoenix Reborn has excellent graphics based on the theme, which help draw players in and set the tone for the challenges ahead. The soundtrack plays a big part in this, while you see symbols such ancient Aztec glyphs, animals and even Aztec warriors show up on the reels. The phoenix itself is fittingly the Wild symbol for the slot game, while a golden mask serves as the scatter in this slot

In Phoenix Reborn, an Aztec temple forms the background for the reels, with the likes of panthers, toucans and snakes – all animals that you can find in the Mexican forests where the Aztec civilization thrived – landing on the reels.

Phoenix Reborn is a slot game with five reels and six rows, and 40 paylines. Players can get wins for landing three or more of the same symbol on a payline, with the female warrior being the most valuable one in Phoenix Reborn, potentially rewarding 10x of your stake if you manage to get five of them on the reels.

The Phoenix Wild will substitute for the other symbols, other than the scatter, to help create winning combinations. It can also provide wins if it lands more than once, with five of a kind providing a 25x bonus.

There is an autoplay option, which allows you to set the bet to be wagered on each spin and the reels will then spin automatically. This can be done for up to 1000 spins, or until your balance increases or decreases by a predetermined amount, or even until the free spins game is unlocked or wins are generated, giving the player quite a lot of flexibility in this regard.

You can get 7, 12 or 20 free spins, if you land 3, 4 or 5 of the scatters in the base game, respectively. During the bonus round, this can be retriggered, with even two of the scatters landing giving you 3 additional spins, while the rest operate as earlier. Thus, players can win up to 40 free spins, with this retrigger only taking place once at most.

In the bonus round, the Wild can also expand to cover multiple positions on the reel, another way in which it can help provide wins. In Phoenix Reborn slot there will be at least one Wild landing on the reels on every spin, which is a great way to ensure that you will end up picking up quite a few wins in this round.

The betting range for Phoenix Reborn online slot is from 0.20 credits up to 100 credits per spin, split across the paylines. It is a high-volatility slot, with a maximum possible win of 5000x, and an RTP of 96%.

Phoenix Reborn is a good blend of a slot game with decent visuals, great features and the chance to win big prizes. It should be an enjoyable online slot for players who like high volatility slots, with the ability to have expanding wilds on each spin in the free spins round a particularly attractive feature.

Try this and other great slots at Las Vegas Casino .com