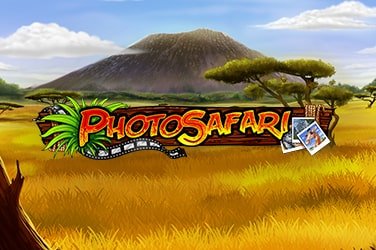 As the name suggests, this is a safari-themed slot game from Play’n GO. While this is quite a common theme for slot games, Play’n GO have managed to put a unique spin on things in this game, and you can also expect the production quality to be excellent, as with all offerings from this leading game studio.

It is no surprise that the backdrop for this slot game is the African savannah, given the safari theme, with the various animals commonly found in this environment also making their way onto the reels, such as lions, giraffes, elephants and zebras, which are all the high-value icons. The usual playing card symbols are the low-value symbols, but these are also designed with a safari touch in mind. A shield with two African drums is Photo Safari slot’s Wild symbol, while a camera film symbol is the Scatter. The overall ambience and look of the Photo Safari slots is excellent, with winning combinations with any of the animals turning into an old-school photograph, accompanied by the sound of that animal, while the online slot’s soundtrack has African drums along with humming insect sounds that you would associate with the jungle. All of this means that it is quite easy to get involved completely in Photo Safari’s slot, which is a huge compliment to the developers Play’n GO.

This is a 20 payline slot game, moving away from Play’n GO’s usual template of 15 paylines, with 5 reels. Photo Safari players can choose to Autoplay after setting their bet level, while they also have the option of selecting the maximum possible bet for each spin.

You receive 15 free spins, where the reels will go dark at first, and the film symbol acts as the Wild for these spins. There is a nice touch here with the symbols turning into old-school negatives of photos for this round. There is a mini-game here as well, which gets activated if you land three camera icons. Here, Photo Safari slot players will have to look through the camera lens to try and take pictures of the various animals. You get three chances to take photos, and the size of your win will depend on the animals that you manage to capture on film.

Photo Safari is a very nice and fun slot game with an interesting theme and some excellent visuals that really capture the essence of a wildlife safari. The bonus games are quite fun and can provide healthy wins as well, so overall this is a light and quirky game that should be enjoyable for slot game fans. Try it today here at Las Vegas Casino.