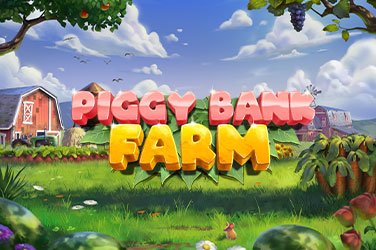 Playn’ GO are known for the top quality graphics and visuals that they continue to provide in their online slot games, so it is no surprise that this Piggy Bank Farm slot title has been provided with some of their best work.

As expected, the game is played on a farm with the background depicting some rather cool imagery. The icons available on the game’s paytable also represent some traditional farm animals, although the traditional playing card values continue to make an appearance with royals from 10 all the way to A available.

The animal icons available in this game include a chicken, a dog, a sheep, and a cow whilst the farmer is the game’s wild and the piggy bank is the game’s scatter icon; there are also hammers available.

This Piggy Bank Farm slot game has 50 paylines available to win from when players are able to land 3 or more matching icons on any of the lines. There are a total of 5 reels and 4 rows in which those symbols can appear.

Furthermore, there is a game panel at the bottom of the page, which allows players to customise their gameplay experience. This includes this spin button, the Settings button, and also the ability to adjust the bet being placed.

One of the special bonus features in this Piggy Bank Farm slot game is the Piggy Bank Spins feature. This is triggered when a hammer appears on the reels, but this icon can only feature on reel 5, though, during the base game.

The piggy banks that are on the reels will be held in their place, whilst the rest of the icons will disappear for the duration of the bonus round. Players will then take part in a re-spin bonus where they will get 3 lives, and the only icons that can land on the reels are more piggy banks. If a new piggy bank lands, then the re-spin counter will reset to three. But, if piggy bank lands in groups of four, they will then merge into larger pigs. Dependent on how many pigs land, players can earn rather handsome rewards, with up to 500x the bet being the maximum.

Furthermore, there is a free spins bonus feature in this Piggy Bank Farm slot game and this is triggered when three scatter icons appear on the reels at any time. In this feature, you will notice that the hammer symbols can appear on any reels of the game, instead of just one. Therefore, players will have a better chance of triggering the Piggy Bank Spins game.

Piggy Bank Farm slot game from Playn’ GO is a quirky and fun online slot that provides players with something a little different in regards to the theme.

However, the free spins, as well as re-spins are a great addition and one that will keep players entertained for a long time.