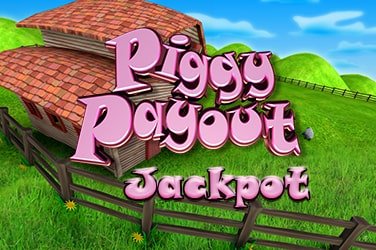 There is a countryside setting to this game, with the reels surrounded by climbing plants and planks made from wood, with the background a sea of pleasant lush green fields, and it has a feel of the children’s story of the three little pigs about it.

Piggy Payout Jackpot video slot game looks and plays just like its counterpart, and offers 25 paylines across five reels, and gives a Return to Player ratio of 92.9% the minimum stake is $/€/£0.25 with the most you can wager being limited to $/€/£12.50 per spin. Tired of hitting the Spin button? Then why not try the autospin feature in this slot game that will keep automatically spinning those reels up to a set limit unless you tell it to stop (the spin button becomes the stop button).

Piggy Payout Jackpot’s wild symbol is the windmill icon and will replace all other symbols on the reels apart from the two scatters, plus, if a wild symbol becomes the part of a winning line, those winnings will also be doubled.

The standard symbols in this slot game are represented by the playing card icons from Jack to Ace, whereas the higher value symbols are the cow, sunflower, sweetcorn cob, and a dog, and there are many other colourful farmyard characters to be on the lookout for.

Piggy Payout Jackpot slot comes with three different kinds of progressive jackpot, namely the Mini, the Mega and the Maxi, and their amounts are seeded at $/€/£50, $/€/£500 and $/€/£25,000 respectively, but will continue to grow if they are not won. Any of the three jackpots can be won during the base game, but they cannot be triggered during one of the feature bonus games. The Return to Player for the jackpot is 3%, which is on top of the Return to Player ratio of the main game.

When a jackpot prize is won, the winning amount returns back to the seed amount for that particular jackpot.

The pig symbol in this slot game counts as one of the scatter symbols, and if you land three, four or five of these on a payline you will be rewarded with either 15, 20 or 25 free spins, with all winnings during this round doubled.

The second scatter symbol is represented by a woolly sheep and landing three or more of these will send you to a pick a prize round where you can win multipliers of various denominations up to 100x your unit stake.

This game is a fun and entertaining slot game that gives you the chance to win big via the progressive jackpots. However, it is not just the jackpot where you can win big, triggering the bonus games of Piggy Payout Jackpot slot can really add up to some sizable winnings should you land 25 free spins or the 100x multiplier.

If you’re looking for the best selection of jackpot slot games on the level of Vegas land based casinos you might want to take a look at the ultimate selection of slots from Las Vegas Casino.