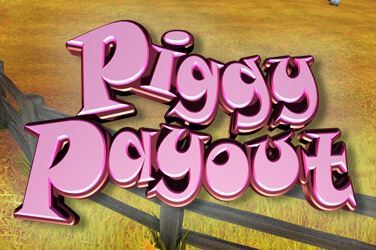 Piggy Payout is a cute slot from Eyecon featuring bright 3D animals, corn, and flower symbols on reels set against bright and attractive rolling green hills. It’s another cartoonish slot from Eyecon, the same developer who made adorable slots like Fluffy Favourites and Fluffy Too, which will no doubt appeal to a similar audience.

As is the case with many Eyecon slot games, players can enjoy two special features in Piggy Payout video slot. The Prize Pick feature is triggered when three or more scattered sheep symbols appear anywhere on the reels. This unlocks a bonus feature in which players will be awarded one pick for each sheep symbol they landed on the reels, up to a total of 100x the bet for each pick.

In Piggy Payouts slot game There’s also a Free Spins feature in the game which is unlocked by landing three or more scattered pig symbols anywhere on the reels. Players can win between 15 and 25 free spins during which all prizes won will be doubled, making this a fantastic mode for making back some winnings.

Piggy Payout is another slot game which works well on mobile. Whether you prefer to play on tablet, smartphone, desktop or other, you shouldn’t have a problem playing this Eyecon slot. The graphics look smooth and well-rendered on any device and display size, making it a good choice for playing on the go.

Piggy Payout offers an average return to player of 95%, which is a little below average for a game of this type but not so much that players should be put off by it. This means that for every $/€/£100 players spend on the reels, they can expect to win around $/€/£95 back. It’s also a medium variance slot, which means there’s a fair balance between payout size and frequency for most play styles.

Piggy Payout is another fuzzy and cute slot game from Eyecon which will no doubt gain a fan base with players who like their slots packed with adorable animals. It’s a good looking slot with two distinct features that are interesting enough to keep players spinning, although there’s ultimately nothing groundbreaking going on in here and the game’s slightly low RTP might put some players off who are keen to try and win back more of their cash.

If you enjoyed Piggy Paypouts video slot game and want to keep the track of excellence slot games you better take a visit to Las Vegas Casino slots page.