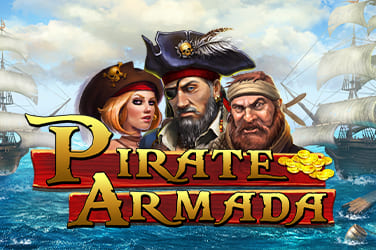 Free Spins and an RTP rate of 94.62% has been made available in this Pirate Armada slot game as players are required to help Blackbeard obtain the treasures he desires!

Created by 1×2 Gaming, Pirate Armada slot game will see Las Vegas Casino players join Captain Blackbeard on an adventure as he looks for treasure and booty to make him a wealthy pirate.

Indeed, the visuals used by the developer help to set the scene as much as possible as players will find themselves on a rather blue sea that has pirate ships to the left and right of the playing grid, whilst the grid itself has been given a golden theme that could be closely associated to pirates.

When taking a look at the game’s paytable, there are a number of icons that can be collected in order to help Blackbeard be successful with his quest. These include the royal playing card icons that have each been provided with different designs, whilst they are then joined by a parrot, a pirate ship and four members of Blackbeard’s crew.

Naturally, the captain appears as the most rewarding icon, with five of him landing on an active payline will provide a win of 20x the bet!

This online casino game is played on a grid that features 5 reels and 3 rows, whilst also coming with a total of 10 paylines, thus keeping the gameplay experience as simple as possible.

Pirate Armada slot players are able to customise certain elements of the game, though, via the settings that have been provided by 1×2 Gaming.

There are a couple of bonus features to keep a lookout for when searching for treasure, with the wild icon in the Pirate Armada video slot playing a role.

This game icon, which is depicted by the dead captain with the word ‘Wild’ below it, can land on all 5 reels that are available and help to form substitutions for all of the regular icons and help form additional winning sequences where possible.

However, the best Pirate Armada slot bonus feature that is available in this slot game is via the scatter icon; the treasure chest. Those that land three or more of these will trigger the free spins bonus game.

Pirate Armada slot spinners who land 3 of these icons will be rewarded with 6 free spins, whilst 4 and 5 scatters will provide 8 and 10 free spins respectively.

Each of the coin values that are attached to the treasure chest icons in the bonus game will come to life, as they will be added together. Furthermore, each time a new scatter is landed, players will receive a payout worth the same as the combined value!

This video slot is playable with a minimum bet of €/£/$0.10 per spin, although those that want the biggest riches and treasures possible will be able to place a maximum bet of €/£/$50 on each spin of Pirate Armada slot.

1×2 Gaming have provided a return to player (RTP) rate of 94.62% for this slot game, whilst there is a medium volatility level attached to the game.

This game is incredibly simple to play but remains incredibly enjoyable at the same time. Although perhaps aimed for casual players, Pirate Armada slot game will provide Las Vegas Casino bettors with a simplistic gameplay experience and one that can be enjoyed thoroughly via the use of the free spins feature!

If you enjoyed playing the Pirate Armada video slot, but you want to feel like a true Vegas player, take a look at Las Vegas Casino’s jackpot slots and win big time.