Pirate From The East Slot 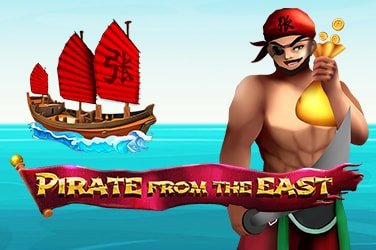 Get ready for a fantastical pirate adventure that looks East. Pirate from the East is a 5 reel, 15 payline online slot that will make you want to become the next Pirate King. With a wide variety of features and bonuses, this slot game is a befitting successor of NetEnt’s track record of creative and unique productions.

Join the band of Japanese pirates in a truly shonen-esque quest for riches. Though some interesting wilds, scatters and free spins, Pirate from the East has high win variations that increase the players potential to win heft rewards.

Though the graphics in Pirate from the East online slot are not top-end, Pirate from the east has a unique design inspired by the very iconic mangas that have been critically acclaimed across the world.

Pirate from the East game’s setting is in the backdrop of a pirate ship. NetEnt advocates a color palette based on brighter colors and a minimalist approach to immerse the player in its gameplay experience. In addition, the slot’s symbols consist of the likes of some sake, compasses and treasure chest that play an important role in doing so.

Pirate From The East Slot Gameplay

The betting range of Pirate from the East is 0.10 to 75 credits. This is fairly broad and is thus, accommodative of budget players and high-rollers alike. Reel Talent has a simple and easy to navigate user interface and functions without fault across all devices.

The objective of Pirate from the East slot game is to obtain similar symbols adjacent to each other in order to yield payouts. Note that some symbols yield higher payouts than others. For instance, as opposed to the lower paying card symbols, high paying symbols yield up to 133.33x the original bet for 5 treasure chests of kind.

The maximum payout of Pirate from the East is 150,000 coins, This can be won by combining standard gameplay with the game’s features and bonuses.

The Wild in this game is represented by the male pirate. This has the ability to replace any symbol in Pirate from the East slot except the scatter. If part of a winning combination, it will attach a multiplier of 3x to your payout. For instance, a combination of 4 treasure chests and 1 wild pay 400x the stake.

Pirate From The East Return To Player

The return to player (RTP) of Pirate from the East is 96.38%. This means that theoretically, a slot player wins an average of 96 for every 100 bet made, Note that this average is a cumulative of over 4000 attempts.

With some generous features and unique shonen style worldbuilding, Pirate from the East is super fun and has a top-end replay value.

This is just one of the many great online casino games you can find in Las Vegas Casino.
Check our slots, table games and much more. Travel to Vegas with just one click.