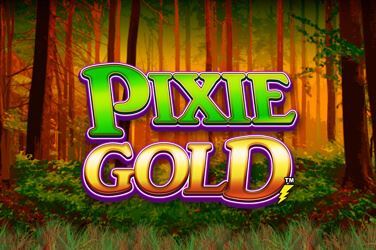 A total of 1,296 different ways to win exist in this Pixie Gold online slot game, whilst there is also an RTP rate of 95.42% that will provide Las Vegas Casino players with a thoroughly enjoyable slot game experience.

Players will be taken to an enchanted forest in this Pixie Gold online slot game from Lightning Box Games, as they will see a number of great visuals and imagery that will help to immerse them into the rather mystical theme that has been adopted.

Indeed, players will see plenty of wildlife around the playing grid in regards to various shrubs and plantation, whilst the woodland can also be spotted from the top of the grid, thus highlighting that Las Vegas Casino players have been taken to an environment where Pixies will tend to hangout.

The symbols have also been designed in a top way, with numerous colours and designs having been used. These icons include things such as the royal playing card icons, as well as the acorn, the staff and knapsack, the ladybird, the snail, the toadstool home and the King.

This Pixie Gold online slot game might look a little busy to some Las Vegas Casino players, however, it is still rather easy to follow once the reels have been spun a couple of times. This might be down to the fact that there are 8 reels instead of a traditional 4 or 5 that can typically be found in many other titles.

Furthermore, there are a total of 4 rows available in the centre of the grid and three on the outside reels.

However, it could be seen as a 5-reel grid because of the ‘Reelfecta’ reel that has been used. The grid is presented as a 4×4 grid that will show 16 individual icons. This is why there are a total of 1,296 different paylines available in this game, as well.

One of the Pixie Gold bonus features available in this game for Las Vegas Casino players is the Wild Pixie feature. This is a bonus game that will be triggered when the King Star icon appears above the column directly above the cart that is being pulled along the bottom of the playing grid by a mouse.

If this happens, a random lucky symbol will be chosen to be added to the ‘Reelflecta’ reel whilst a Wild Pixie will be placed over all 3 reel positions of reel 2. This will mean players are able to potentially win big via this feature when they trigger it!

Furthermore, another Pixie Gold online slot game bonus feature to have been made available is the ‘Gamble’ feature that is available to trigger. This can be done after any win that is achieved, with players able to double and quadruple their winnings if they choose the correct outcome. It should be known that an incorrect choice will see all winnings lost from that spin!

The minimum bet allowed to be placed on this Pixie Gold online slot game is €/£/$0.50 per spin, although players who want to place bigger wagers on the action involving the magical pixies are able to place a maximum bet of €/£/$500 on each spin that is made!

This Pixie Gold online video slot game provides Las Vegas Casino players with a highly entertaining game experience and one that can prove to be rather lucrative at times, especially if the ‘Reelflecta’ feature comes to fruition.

The ‘Gamble’ feature is also a nice addition if players want to try and maximise their winnings in a potentially quicker way!