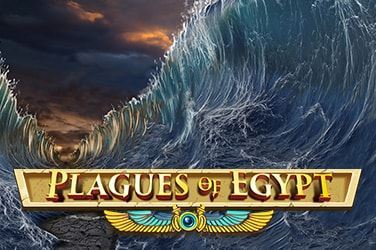 Although gruesome, this Plagues of Egypt slot game has jackpots, a re-spin feature and a wild icon that help make it rather rewarding at the same time!

Players will be taken to a backdrop of Egypt when they play this Plagues of Egypt online video slot game from Fugaso, with things looking a little daunting for those Las Vegas Casino bettors who decide to give it a spin.

The game features some exceptional imagery and animations, with Moses being visible to the side of the playing grid, however, there are some rather concerning symbols that are available on the paytable. But, a huge pro about this is that they represent the awful plagues that have impacted the region.

The icons available include things such as water that has been turned into blood, lots of frogs, flies, biting insects, animal diseases, skin boils, bolts of fire striking down, swarms of locusts, a symbol to represent the turning of day to night for 3 days, and the death of their firstborn child.

The Pharaoh also appears, whilst the game’s wild icon is represented by a pyramid that features the word ‘Wild’ on it.

This Plagues of Egypt online video slot game will provide players with a playing grid that consists of 5 reels and 4 rows, as well as a total of 40 fixed paylines.

There are a number of different customisable options available for players to be able to enhance their overall gameplay experience, though, such as utilising the ‘autoplay’ feature or by being able to place the ‘maximum bet’ in an instant.

This Plagues of Egypt online slot game has a number of different bonus features that are available to be triggered, with each of them providing players with the potential to increase their winnings in a seriously good way.

The first of the Plagues of Egypt bonuses available is via the game’s wild icon. The pyramid symbol has the power to be able to substitute for all regular icons that are available on the paytable and help to complete any possible winning combinations that may be formed. It should be noted, though, that this icon can only appear on reels 2 and 4; nonetheless, it can still be rather rewarding when it lands!

Another great Plagues of Egypt bonus available to Las Vegas Casino players who spin the reels of this game is the ‘Re-Spin’ feature that can be triggered.

This feature will be triggered on each winning spin and will provide players with the opportunity to win further rewards as the winning icons will be locked in place whilst the other icons will be respun!

There are 3 progressive jackpots that can also be won when playing this game!

A minimum bet of €/£/$0.40 is required in order to play this Plagues of Egypt online video slot game, whilst Fugaso has provided bettors with the chance to place a maximum bet of €/£/$20 on each spin taken.

The return to player (RTP) rate for this game stands at 95.8%, whilst the volatility level is of a medium rate.

Although the plagues that hit the region were rather devastating, Las Vegas Casino players will find that they can be rather rewarding for them when they achieve a successful spin.

The respin feature is arguably one of the best bonuses this game has as it means bigger wins can potentially be provided, although the 3 progressive jackpots on offer isn’t a bad thing, either!