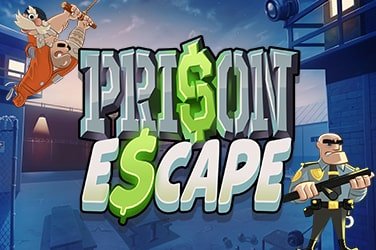 Packed with bonus features,Inspired Gaming have provided a top online slot experience with their Prison Escape slot game title loaded with a 5×3 grid plus a RTP of 95.9%.

Las Vegas Casino online players will find that they are met with a rather cartoon aesthetic and fun online casino game when they give the reels of this Prison Escape slot a spin.

As Las Vegas Casino analyzed, he online slot theme is set in a prison with a window looking out on a courtyard, that sees a number of searchlights looking out for anyone that tries to escape, although the animations do show that there are the odd person trying to make a run for it.

In Prison Escape the icons on the paytable are also provided in a rather great and simplistic visual way with the cartoon theme being heavily adopted. These game icons are split into two different categories, with the lower paying icons being represented by the traditional playing cards, J, Q, K and A. The premium game symbols are a police truck and a searchlight, as well as a prison guard and the two prisoners.

5 reels and 3 rows, with a total of 10 different paylines, in which winning icons can appear is Prison Escape background.

As Las Vegas Casino analyzed, those that wish to further enhance any of the gameplay experiences are able to click on the right hand side, where there are a few different buttons that can help maximise it.

The slot game’s wild is the lock and states in writing that it is a wild, providing players with the chance to form additional winning combinations where possible as it can substitute for any regular icon.

However, the main bonus feature in this Prison Escape video slot is via the bonus scatter icons that appear on reels one, three, and five. If players are able to land all three, they will be taken to the blueprint bonus game, which is where they will roll the dice and creep through the halls to unlock the bonus. If players are unable to do this and are caught by a prison guard, the game will come to an end.

As Las Vegas Casino analyzed, once they achieve what they need to do, Prison Escape online casino game players will be rewarded with a different number of prizes. Making the Warden’s office and the workshop both provide instant win bonuses, whilst the Control Room will provide players with the chance to grab up to 12 free spins and a wild that will stick in place for four of those spins.

As Las Vegas Casino also analyzed, any win that is recorded in the Prison Escape’s main game can be gambled through an additional feature, although this is optional. This is a simple round, where players are able to just select what they think the next outcome will be.

Bets can be placed from as low as €/£/$0.10, whilst the highest bet available is €/£/$40 on each spin. Prison Escape online slot game has a return to player (RTP) rate of 95.9%, as well as a medium volatility level, which means players can expect to receive some rather frequent rewards.

Las Vegas Casino online players will be provided with a real treat when they take on this Prison Escape slot game from Inspired Gaming, as it is crammed packed with a number of great bonus features, as well as a top RTP rate.

If you are looking for an adventure that provides some thrills, then look no further than this Prison Escape slot game.