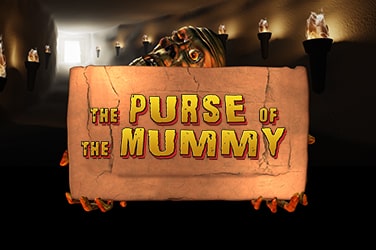 Free spins, win multipliers and other bonuses await bettors playing this The Purse of the Mummy slot game!

The Purse of the Mummy Slot Game Theme

Ancient Egyptian themes have always been incredibly popular for slot games, which is why Genii have decided to take inspiration from the theme for their The Purse of the Mummy title.

The game features a backdrop that appears as though players have headed into a tomb or a pyramid as they go on the hunt for treasures, whilst the playing grid features a cool stone look to help fully immerse players into the slot.

In regards to the paytable on offer, there are a number of different symbols that all fit in with the theme that has been applied with each of them appearing as tiles and in the form of hieroglyphics. These include the standard royal playing card icons, as well as a snake, a horned creature and an archaeologist who is holding a flame.

The Purse of the Mummy Slot Gameplay

This The Purse of the Mummy slot game features a playing grid that consists of 5 reels and 3 rows in which the icons available can fall into position to form winning combinations of three or more when identical.

There are a total of 15 paylines in which these sequences can be made, but players are able to customise how many they use via the settings that are on offer.

The Purse of the Mummy Slot Game Bonus Features

Genii have provided their slot game with a number of The Purse of the Mummy bonus features via the use of a variety of different special icons that can be found once the reels have been spun.

The first is King Tut, as he is the game’s wild. Although he does the traditional function that a standard wild will do and replace all regular icons via a form of substitution, he also has another power.

Each time he lands, he will reward adventures with a greater prize than they initially would have expected, as he will increase the win by 2x. Those that are able to land multiply wilds will see those also increase. Therefore, those that land 4 wilds will receive a reward that has been given a boost of 16x the bet!

In addition, another of the special icons to feature in this game and activate The Purse of the Mummy bonus features are the two scatter icons.

The first is the mummy which will activate the free spins game, whilst the scarab icon that will trigger the scarab feature when it appears on reels 1, 3 and 5.

The free spins game will see players gain 5 free spins when they land 3 of the mummy icons, although 15 and 25 free spins are available to those who land 4 or 5 of them respectively. This can be re-triggered by landing more scatters, whilst each win is provided with a 5x Win Multiplier.

The scarabs will trigger the scarab sprint feature will see the scarabs compete in a race, where players will choose which one they think will win to obtain a prize. The higher they finish in the race, the better the reward.

The Purse of the Mummy Slot Game RTP

The return to player (RTP) rate for this The Purse of the Mummy slot game is unknown.

A minimum bet of €/£/$0.01 is possible on each spin when the lowest bet settings have been opted for. A maximum bet of €/£/$37.50 is also possible, though, for those looking to find the biggest treasures on offer!

The Purse of the Mummy slot game is an exceptional title and one that will keep players interested for as long as possible as they will be able to experience a plethora of different bonus features!