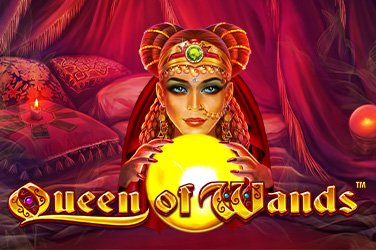 Queen of Wands, by Skywind, is a slot game that uses a fortune-teller as the theme, with the game taking place in her tent. There are a couple of interesting bonus features in this game that can truly reward you, with the Queen of Wands herself helping out as well.

As stated earlier, the setting for Queen of Wands online slot game is inside the fortune teller’s tent, such as you would find at a fair. The imagery is also heavily influenced by tarot cards, another popular method of fortune-telling, with bright suns, blue waves, green trees and golden chalices all showing up on the reels. The game’s logo is the Scatter symbol, while the Queen of Wands is the Wild. The standard card royals are also on the reels, and all symbols have short animations that play out if they are part of a winning combination, although this can be done away with in the ‘turbo mode’. The background score is suitably mystical as well, and the various sound effects help to create a truly immersive experience.

This game has five reels and 40 paylines. The gold goblets can pay out up to 400x of your stake if you land five of them in combination while the Queen of Wands is the highest-value icon, paying out 1000x for the same. It can appear stacked on the reels, and will substitute for all other symbols except the Scatter. The Scatter only appears on the three middle reels. In general, wins are awarded for landing three or more symbols in combination on a payline.

Landing the scatter across the three middle reels triggers the Free Games bonus round. Here, slot players receive 8 free spins, where there is a 3x multiplier in effect as well for all wins during this round. This round can be retriggered as well if you land three Scatters again, with an additional 8 free spins being awarded for the same. Queen of Wands video slot players also benefit from an extra stack of Wilds being added to the reels during this round, which can help create more winning combos and potential five-of-a-kind wins as well.

Queen of Wands players can bet from 0.01 credits up to 50 credits per payline, with the number of active paylines being fully customizable as well. Thus, you can potentially bet up to 2000 credits per spin at the max bet per payline and with all 40 paylines active. This is a medium to high variance slot game with an RTP of 96.96%

Queen of Wands video slot is an interesting game – it has great visuals and simple gameplay with a bonus round that can provide some large rewards, especially if you manage to retrigger the round multiple times. This Las Vegas Casino slot game is definitely one that will keep players entertained, and with some big potential wins, it should provide enough rewards as well.