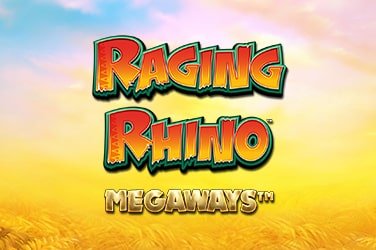 The Las Vegas Casinos collection features a huge array of slots games including some that have earned their spot in the slots gaming hall of fame, such as Raging Rhino. Produced by WMS, the online version of Raging Rhino proved to be a massive hit with casino fans when it was released in 2014 and now there is a new twist on the classic formula with Raging Rhino Megaways.

The theme of Raging Rhino Megaways slot remains the African savannah, which makes up this slot game background to this six-reel layout . On the reels, you will see the familiar card icons from Ace down to 9 that represent the lower values, while the higher value tiles are represented by a variety of colourful animals, including crocodiles, cheetahs, gorillas, rhinos and badgers.

In this slot game, the rhino, as you might expect, is the most rewarding symbol, paying you x25 your stake if you can land six on the reels. The Wild here is a sunset and it appears on the top horizontal reel, substituting for any regular symbols during the main gameplay, aside from the Scatter.

The addition of the Megaways mechanic adds a new dimension to this classic slots title, which has an RTP of 96.18%. The available paylines vary on each spin, with each reel able to hold between two and seven symbols. At its maximum setting, the slot game offers 117,649 winning options, so big wins are possible even in the base game.  Raging Rhino Megaways Slot also employs the popular Cascading Reels feature, in which the symbols that make up a winning combination disappear leaving room for new symbols to drop down.

In Raging Rhino slot game, the really big wins are likely to come with the Free Spins feature. To trigger this feature, slot players have to land four diamond Scatters anywhere across the reels. Initially, this feature will reward online slot players with eight Free Spins, but if three or more Scatters appear during the Bonus feature, the Free Spins are retriggered and eight more added to your total. And, for an extra bonus, each cascading win will boost the win multiplier.

Another player-friendly feature is the Raging Rhino Multiplier Wild bonus. In this slot game, the Wild can appear with multipliers that range in size from x2 to x5, and this bonus, when combined with the win multiplier is capable of producing wins that can exceed 10,000 times your stake. Finally, for the new slot players, there is a welcome addition in the form of the Bonus Guarantee. This means that however your luck goes during the Free Spins feature, you are guaranteed a win of x10 your stake.

Raging Rhinos is one of the classic games of the modern online slots world, and although its high volatility is not for everyone, the addition of the Megaways mechanic has added a new dimension to this slot game. The visuals are compelling, and the potential for big wins thanks to the 117,649 ways to win, will ensure that this take on the classic game will remain popular with slots fans.