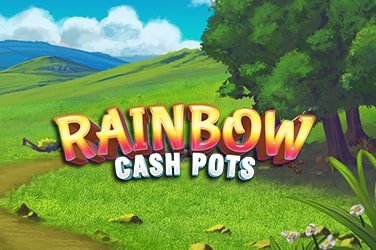 There are many Irish themed slot games doing the rounds at the moment, but it seems as though people cannot get enough of them as they still keep coming! One of the most-loved offerings is Inspired Gaming’s Rainbow Cash Pots, a colourful fun slots game to suit all abilities.

This game comes with five-reels on three rows and offers 10 paylines, with the minimum stake set at just $/€/£0.10, whilst the maximum bet is $/€/£60 per spin. The game offers a Return to Player ratio of 96.5% and a 3.5% house edge. The medium to high volatility of this slot game should make it attractive for gamblers of all levels, and the maximum win has been capped by Inspired Gaming at a not to be sniffed at $/€/£222,000.

At the lower end of the pay table comes the ubiquitous playing card symbols from Jack to Ace, and these pay out as much as 10 times the unit stake for landing five Aces on a payline at the same time.

The most valuable symbol of Rainbow CashPots video slot is the game’s logo; however, the leprechaun’s boot and hat symbols also have a high payout value as well. Landing five game logo symbols on a payline will offer you 200 times your unit stake, whilst both the green hat, the boot and the four-leaf clover will return 100 times your bet for five. The pot of gold symbol, the mushroom and the gold horseshoe will all pay 50 times your stake for five on a payline.

As mentioned above, there is just one solitary bonus feature in this slot game, but the amounts you can win definitely makes up for the lack of other bonus games. It is equally important to note this game does not have any wild symbols, but the pot of gold symbol more than makes up for that.

When the pot of gold symbols land on the reels they come with varying cash amounts attached, which comes in addition to the pay-out value you get from them. These symbols also trigger the only bonus feature, which is the free spins bonus.

To trigger the Rainbow Cash Pots slot game’s free spins, you need to land four pots of gold symbols on reels one to four, as well as a rainbow mirror symbol on reel five. When this happens, those symbols become sticky and will grant you as many as five free spins.

Despite only offering one bonus game, Rainbow Cash Pots slot provides an entertaining and challenging online slot game that will appeal to casual and hardened gamblers alike.

Enter in a long run of huge wins on the best online slot games right here at Las Vegas Casino. Leave your worries on the casino foyer and be in with the chance of playing in the best selection of slot games.