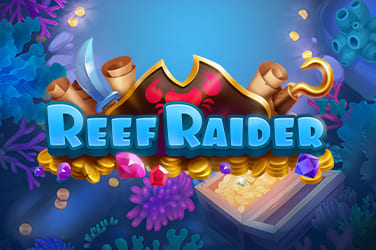 NetEnt have provided Las Vegas Casino players with an underwater adventure that has a rather fun vibe attached to it with their Reef Raider online slot game title.

Players will instantly know that they are beneath the surface due to the imagery and graphics applied, as they will be at the sea’s bed where they will see sand and various pieces of coral and plant life that have been made rather colourful.

There are a number of different colourful symbols available on the paytable of this game, with a total of 8 having been provided. The low-value icons are the colourful shells that can be found in many seas around the world, whilst these are then followed by four gems that are worth slightly more, with values of between 25x and 150x the stake possible.

Reef Raider online video slot game also has wild icons available, which can help to create additional wins, whilst there is also a multiplier icon that can appear in values of either 2x, 3x, 5x, or 50x!

Reef Raider is a video slot game that features the Cluster-Pays mechanic rather than the traditional paylines option that many other games available at Las Vegas Casino will typically have.

The playing grid consists of 7 rows and 7 columns, though, which means a possible 49 icons can appear on each spin. Wins are achieved when a minimum of 5 icons can form a cluster, although bigger clusters will provide the bigger wins.

As is standard with a Cluster-Pays slot game, Reef Raider features the avalanche feature that will take place when a win is formed. The cluster will disappear and will then see new icons appear in order to try and boost the wins formed on that spin. A wild symbol will also be left on each avalanche!

Players who are able to achieve consecutive avalanches will be rewarded with modifiers and free spins, whilst the Treasure Trail will keep track of the progress being made. Each 3 charges will trigger one of the following triggers in the order that they appear:

• Anchor Drop – 1 to 3 types of low win symbols are randomly chosen, and all instance of them are removed from the grid.
• Random Wilds – 4 to 8 Wild Coin symbols are placed on the board in random positions.
• Mystery Chest – 2 to 16 medium win symbols on the grid are replaced by mystery symbols. Mystery symbols all transform into the same matching pay symbol type.
• Cannon Blast – a symbol on the play area is randomly chosen, then all pay symbols on the same row and column are removed.

Once the free spins game has been activated, a Mystery Overlay feature will also be triggered, which will see mystery chest icons appear on the start of each free spin. These icons will reveal a winning cluster whilst random mystery symbols can also appear.

The return to player (RTP) rate for Reef Radier has been set by NetEnt to be 96.10% and comes with a medium volatility level.

Las Vegas Casino players can get involved with the underwater adventure with a minimum bet of €/£/$0.20 per spin, or look to obtain the biggest prizes with a maximum bet of €/£/$100 per spin also possible!

As can be seen from this review, there is plenty to get excited about with this Reef Raider video online slot game from NetEnt.

Of course, the number of bonus features available will have to be the biggest draw for this title, although the fact that big wins are possible via the Cluster-Pays mechanic that has been used should be enough to get players diving deep into the Great Barrier Reef!