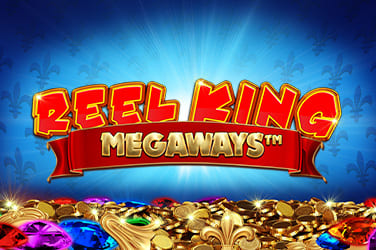 With 117,649 ways to win, Reel King Megaways slot game also provides Las Vegas Casino bettors with the chance to earn between 8 and 25 free spins, as well!

Reel King Megaways is a slot from Inspired Gaming that will provide bettors with the opportunity to win big when they play this game.

The visuals applied by the developer could be accused of being a little basic, but this actually helps to add to the overall gameplay experience as they do not distract bettors from what is taking place on the grid.

A simple blue background and a playing grid that features a gold border is available, whilst the symbols on the paytable feature many of the traditional and standard icons that can be found in other games, such as the classic playing card icons and the classic fruit machine symbols.

The vast majority of games that feature the Megaways mechanic will ultimately end up looking the same, which means it is hardly a surprise to see that this Reel King Megaways slot game has a playing grid that consists of 6 reels and the potential of up to 7 rows, although this can vary between 2 and 7.

As a result, there are 117,649 different paylines that are available to win from, thus providing Las Vegas Casino bettors with the opportunity to win big in a number of different ways.

It does not come as a surprise to see that Inspired Gaming has provided a number of Reel King Megaways bonus features within this game, so it is best to get straight into them so you can enjoy this slot quickly.

The first of the Reel King Megaways bonus features that may be encountered is the Lit Reels. This can happen during the base game and between 0 and 6 of the reels can be lit on each spin that is made.

Those that are lit will turn yellow and will advance players along the feature metre, whilst each cascade that takes place will light up an additional reel and push the player further towards the bonus round.

There are a total of 3 different Reel King Megaways bonus features available that offer free spins:

Players who find a Reel King that shows a losing combination will note that it will be removed from the game and the bonus will come to an end if none are remaining.

Those who manage to advance five spaces on the Free Spin Trail will trigger the free spins game, where the multiplier will increase with each and every cascade that happens.

Further Reel King Megaways bonus features include the gamble game, which will allow bettors to gamble the bonus before entering the free spins game. Here, a wheel will be presented where players can gamble with the free spins that they have to obtain a total of 25, although a losing outcome will see each of the free spins obtained be lost.

Each round will provide a lit reel in this bonus, but if players are able to light all of them up, they will receive a random number of free spins and a random win multiplier that will be added to the total!

A high volatility has been set for this Reel King Megaways slot game from Inspired Gaming, who has also combined it with a return to player (RTP) rate of 96.23%.

€/£/$0.20 is the minimum bet that is possible on this slot game, whilst the maximum bet is €/£/$20, thus making Reel King Megaways video slot available to players of all budgets at Las Vegas Casino.

Video online slot games that feature the Megaways system will always be highly popular and there is no doubt that this one will prove as popular as any of the others!

With so many great bonus features to have been provided by Inspired Gaming, there is plenty to get excited about, whilst there is a lot that can happen on each spin!