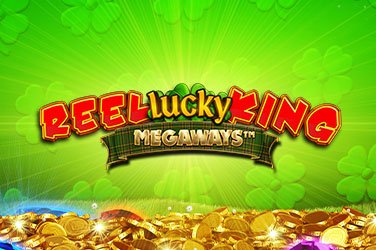 Las Vegas Casino players will be hoping the luck of the Irish is with them when they play Inspired Gaming’s Reel Lucky King Megaways online slot game, as there are a total of 117,649 ways to win, as well as a number of great bonus features such as a free spins trail with rising multipliers.

Those that decide to play this Reel Lucky King Megaways slot will find that there is an Irish theme throughout the game, and it is one that is obvious to anybody that knows anything about the stereotypical ways that have been used in the past.

Players should notice that there is a number of green coloured items throughout the screen, with a number of four-leaf clovers being dotted around, whilst there is a bright and colourful rainbow that graces the edge of the playing board.

When taking a look at the paytable of this Reel Lucky King Megaways online slot , there are a number of classic icons that can be found with a number of the traditional fruit machine symbols being used, as well as the traditional playing card royal values. These items include cherries, plums, watermelons, 9, 10, J, Q, K and A.

Furthermore, there is a pot of gold that is the most rewarding icon of this game, whilst there is also a lucky horseshoe wild icon that can help to substitute for all the regular symbols available on the paytable, although it does not offer any direct prizes by itself.

Reel Lucky King Megaways slot game features a playing grid that is slightly different to many other online slot games. However, this is the reason as to why there are up to 117,649 different ways to win. The megaways system will randomly place between 2 and 7 symbols on each of the 6 reels that are available, whilst there is a 7th row that will spin horizontally above the middle ones.

Players who wish to customise their gameplay experience with this Inspired Gaming online slot game are able to do so by clicking the settings button that is located on the right hand side of the grid.

There are a number of different special bonus features that are available in this Reel Lucky King Megaways slot with the cascading feature likely to be one of the first that is noticed. All wins will be removed after each spin, allowing for new icons to drop down and help form even more winning combinations from that same spin.

If players are able to see three reels of any real king and the reels light up, they will be able to advance along a free spins trail that allows up to 15, 20 or 25 Free Spins to be played at the end of the Reel King, Super King and Lucky King trails. This game will continue to spin for as long as you land winning combinations.

During the Reel King and Super King features, players will need to light up at least five mini-slots to trigger the free game bonus. These can be kept track of, with the meters on the sides of the reels. During the feature, a multiplier will rise by 1x the bet for any cascade that is formed, whilst reels will light up in red until non-winning spins occur.

Las Vegas Casino players will find that this Reel Lucky King Megaways online slot has a return to player (RTP) rate of 95.96% and are able to play this video slot for as little as €/£/$0.20 per spin and for as much as €/£/$20 on each turn that they make.

Las Vegas Casino online players will know more than anybody else that the Irish theme is one that is incredibly popular with developers and one that has proven to be incredibly successful in the past.

Many will enjoy the Irish themes that this Reel Lucky King Megaways online slot provides them with whilst others will certainly enjoy the 117,649 ways to win that allows them to reach a massive 12,500x the stake where possible.