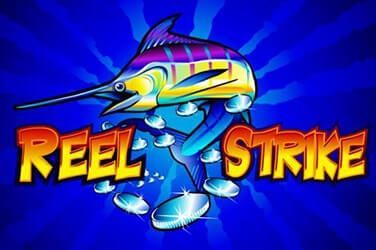 Simplicity is rewarded with free spins, win multipliers and wilds in this Reel Strike videoslot game!

Microgaming have decided to adopt a theme of simplicity for their Reel Strike online slot game, as the developer has used a plain background in which the slot is played on. However, it remains incredibly effective, as it features a bright and vibrant orange colour!

The symbols available on the paytable are also kept relatively simplistic, but also remain highly effective. There are a range of different fishes available to collect on the playing grid, as well as a boat’s gear and a boat, as well as the game’s logo.

Following on from a theme of simplicity, the gameplay experience provided by this Reel Strike online slot game follows a rather traditional setup, as well.

With a couple of different Reel Strike bonus features being available in this game, Microgaming have made it extremely rewarding for Las Vegas Casino players who decide to give it a go!

The first of the bonuses that can be obtained includes the wild icon, which is the fishing reel. This icon is the most valuable on the playing grid, whilst it can also help to produce additional winning sequences where possible.

However, those who are able to land 5 of the bonus propeller icons on an active payline will be able to trigger the best Reel Strike bonus feature available. The videoslot players will be taken to a new screen where they will see a total of 6 different boats.

Reel Strike slot players will be tasked with choosing two boats from the 6 made available, with the first pick determining how many free spins will be awarded (with a maximum of 7 available), whilst the second pick will determine how big the win multiplier will be (6x is the highest multiplier) before the game starts.

The return to player rate for this Reel Strike slot game is 95%.

A minimum stake of just €/£/$0.15 per spin is all that is required for Las Vegas Casino players to get the game rolling, although a maximum bet of €/£/$150 is also possible for those looking to win the biggest potential rewards that are on offer!

Sometimes simplicity is best and this Reel Strike online video slot game from Microgaming will show Las Vegas Casino players just why that is the case. Furthermore, the great bonus features that have been included only further add to the gameplay experience and make this a top title!

Play the most popular slots at Las Vegas Casino today and be part of the ultimate casino experience while having fun.