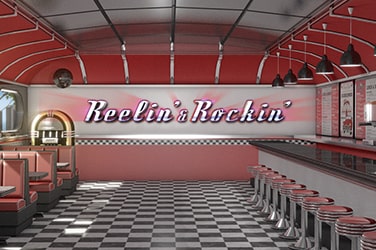 It’s time to rock out at an American Diner with free spins and optional gambling features in Genii’s Reelin’ & Rockin’ slot game title.

Players will be taken to a classic American diner setting as they will be able to rock out to the tunes that are available on the jukebox as they enjoy some classic dishes and drinks that can be typically found.

The slot game’s graphics and visuals are as immersive as possible, as Genii have adopted a standard that meets their typical level, whilst keeping things as fun and enjoyable as possible with the imagery used.

The Reelin’ & Rockin’ slot game paytable features a host of different pay symbols that can be collected by users, with the traditional royal playing cards providing players with low-value amounts.

These are then followed by a strawberry milkshake and ice cream dessert, a pair of sunglasses, a varsity baseball jacket, a supercar and a rather cool-looking dude who is enjoying his time at the diner.

This Reelin’ & Rockin’ video online slot game is easy to play and understand, as Las Vegas Casino players will have likely seen the format adopted by Genii before in other games that are available to play.

The playing grid to have been applied in this slot consists of a total of 5 reels and 3 rows, but there are also just a total of 9 paylines that are available to form winning combinations on, with each of these being adjustable with each spin made.

There are a couple of different Reelin’ and Rockin’ bonus features that are available to trigger in this game, with each of them being potentially rewarding when they have been activated.

The first of the special bonuses in this slot comes in the form of the wild icon, which is the jukebox that is available. This symbol has the ability to substitute for all of the regular pay icons that are on the paytable and help form any potential winning sequences where possible, whilst also doubling the reward! In addition, players who land five of these symbols on one spin and on a payline will be able to receive 10,000 credits!

The main Reelin’ & Rockin’ video slot bonus feature, though, is the ‘Free Spins’ game that can be triggered. This happens when players are able to land the female character that Genii have provided, with players needing 3 or more of her to appear. In addition, these icons payout when they appear, whilst the prizes collected during the bonus will give rewards of 3x the bet! More free spins can be won by landing more scatter icons.

The last of the Reelin’ & Rockin’ bonuses is the ‘Gamble’ feature, which will allow players to win up to 4x of the winning spin achieved. This is triggered on each winning spin but is optional so Las Vegas Casino players do not need to gamble if they do not want to.

Reelin’ & Rockin’ slot game is a fun title from Genii that will have Las Vegas Casino players enjoying each spin that they place. The free spins bonus is the biggest draw as wins here can be potentially lucrative, although bettors do have the opportunity to 4x their prize on each win that they make!