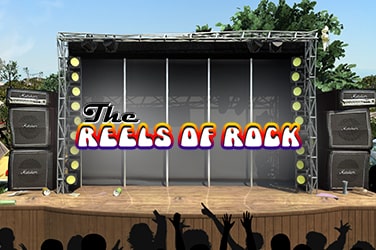 Plenty of bonus features, including free spins and a Pick-em game are available as players rock out to this Reels of Rock online slot game!

Genii’s Reels of Rock online video slot game features a rock music theme, although that should not come as a surprise given the game’s title. Las Vegas Casino players will be taken to a stage area that is akin to one found at a music festival and they will be able to rock out to some rather impressive visuals and graphics that have been provided.

There are a number of brilliantly drawn visuals and symbols available on the game’s paytable, with each of them fitting well with the theme that the developer has looked to try and follow when creating this title.

The paytable features admittance tickets, VIP passes, band t-shirts, a drum set, a microphone, two different guitars, and the three band members. There are a number of other icons available in this slot game, but these are crucial for the Reels of Rock bonus features that can be triggered.

This Reels of Rock slot game is easy to play as it features a playing grid that follows a rather basic format. There are 5 reels and 3 rows available to try and make winning combinations on, with a total of 9 adjustable paylines available on each spin made.

Each of these paylines can be adjusted via the settings available, as well as a number of other options to help enhance the overall gameplay experience.

There are a couple of special icons available in this slot game which all help to trigger a number of different Reels of Rock bonus features.

The first of the slot bonuses is via the wild icon, which is a Jimi Hendrix-looking icon who is actually named Jimmy Plectrum. This icon can help to form additional wins as it will replace regular icons on the paytable where possible.

However, there are two scatter icons that both have the potential to make this videoslot as lucrative as possible when they activate the bonus game that is available with each of them.

The first of these Reels of Rock bonus features is the ‘Free Spins’ game that is activated when Vicious Tim appears 3 or more times on the playing grid in any position. When this happens, players will receive a minimum of 10 free spins, although 20 and 40 can be on offer depending on the number of scatters that land.

Each win that is formed in this bonus will be tripled, whilst it can be re-triggered when more of the scatter icons land.

The final Reels of Rock slot bonuses available is via the tour bus icon, which can only appear on reels 1, 3, and 5 but this will trigger the ‘Reel Rockin Tour’ game. Las Vegas Casino players will enter ‘Joe’s Bar’ where they will see each of the band members together to create a ‘Super Group’. Players will simply need to pick three of the notes that can be found above their heads to win a prize, with each note providing a reward.

The minimum bet available in this Reels of Rock online video slot game is €/£/$0.01 per line when the lowest bet settings have been applied, whilst the maximum bet is €/£/$45 per spin!

The return to player (RTP) rate is thought to be around 91%.

Genii have packed their Reels of Rock slot game with a number of bonus features that will keep them jamming for as long as possible, as each one can provide a number of benefits. With up to 40 free spins available, with each of them re-triggerable, there are plenty of reasons why this game needs to be played now!