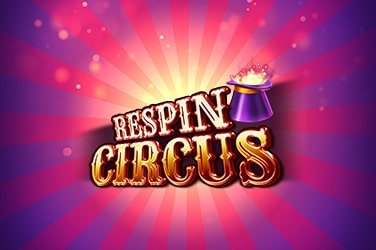 People have enjoyed circuses as an entertainment option for hundreds of years. However, they are few and far between today, and so this slot game by ELK studios is a great throwback to those times where circuses used to be found much more regularly. Respin Circus has an exciting soundtrack and visuals to go with this theme, as well as a good chance of slot players picking up big wins.

Given the theme of the online slot, the visuals are bright and vibrant, with a circus tent forming the backdrop for the reels. The themed symbols on the reels include various animals, such as monkeys, rats, cats and maracas, while other circus staples such as cannons and bicycles show up as well. In Respin Circus slot the card royal icons are the online slot game’s low-value symbols, but these are also in line with the overall theme, and so are bright and colourful, and are in the form of balloons. All of the animals are performers and so are decked out in that manner, while the Wild symbol is a rabbit magician, complete with a magician’s hat as well.

This slot game has six reels with four rows and 64 paylines. Players have the option of autoplaying the game as well with various betting strategies available which will set their bets for each spin automatically based on the strategy selected. For example, one such option will reduce the player’s bet after five consecutive losses, while another can increase the bet after the same outcome. This adds an element of strategy to the slot game for slightly more experienced video slot players.

Respin Circus Wild plays the usual role of substituting for other symbols, except the scatter, while it can appear on all reels except the first one. Depending on the number of Wilds landed, it can also offer a 2x, 3x or 4x multiplier, or even become a fully stacked wild reel.

Given the name of this video slot, Respin Circus, there is a lot of focus on respins, which come into play whenever you land a winning combination by having three or more of the same symbols on a payline. In Respin Circus all the symbols that are part of the combination become sticky, with the remaining reels spinning again. If the additional symbols that show up form a combination with the sticky symbols, they will become sticky as well, and another respin will occur, while if a different symbol appears on the payline but one that is of a higher value, all the sticky symbols will get transformed into that symbol, increasing your win. In Respin Circus
this feature ends either when all the reels are filled with the same symbol, or when no matching symbols show up on a respin.

This continues in the free spins game as well, which is triggered if you land three or more of the scatter symbols, which are Golden Ticket icons. The same mechanism plays out – the scatter symbols are locked while the rest of the reels spin again. You can get up to 24 free spins for this round, based on the number of scatters you manage to land, while the Wild and the Respin feature are all active during this mini-game as well.

This is a colourful, entertaining game that has a lot of elements that will appeal to slot players. The respin feature makes it possible to pick up healthy wins in the base game itself, and so this game should keep players engaged and entertained throughout. This is just one of the many amazing slots Las Vegas Casino has to offer.