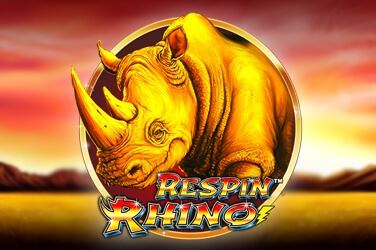 With a return to player (RTP) rate of 95.62%, as well as a total of 40 paylines, Las Vegas Casino players will be able to experience an African theme with Lightning Box Gaming with their Respin Rhino slot game title.

As mentioned, and perhaps, as the name suggests, Respin Rhino is a video slot that is based on an African theme and features a number of the biggest creatures that roam the continent.

Players will be transported to an African Sahara, as the burning sand can be seen in the background of the game, as well as elements of wildlife and a crisp sunset.

After a quick browse of the paytable of this Respin Rhino slot, players will find that there are a number of brilliantly hand-drawn symbols that help further bring the theme to life.

There are a number of playing card royal values available, which are then followed by the African based creatures, which include elephants, a bird, a monkey and a white tiger. Furthermore, there is also a golden Rhino that also appears.

The playing grid of this Respin Rhino online slot game features a total of 5 reels and 4 rows, as well as a total of 40 paylines that are fixed. This means all 40 are in play for the duration of the game.

Although these might not be customisable, there are still a number of options that can be altered to enhance the overall gameplay experience felt.

There are a number of different special bonus features available in this Respin Rhino slot with the first and main bonus, being of the same name.

To trigger the Respin Rhino bonus, players must hope that reels one and five completely fill with images of the Golden Rhino. When this happens, the reels will be locked and the symbols in reels one and five will show stacked rhinos. If players are fortunate enough to land a wild in the middle three reels, they will then be able to reset the respins counter back to three and begin the feature again. There is a limit of this happening, with it having been set at 3 times in total. Therefore, the potential of winning up to9 respins is available.

Lightning Box Gaming have also provided a bonus feature via the wild symbol. This symbol is depicted by the female African villager and she appears in her tribal costume. She can only appear on reels two and four. However, she will dance up and down them, and substitute for all other symbols that appear there to help form any potential winning combinations.

This Respin Rhino online slot game comes with a return to player (RTP) rate of 95.62%, and features a medium volatility level.

Las Vegas Casino players will find they can bet from a minimum of €/£/$0.40 per spin or for a maximum of €/£/$200 on each turn of the reels, thus catering for players of all budgets.

Lightning Box Gaming have provided a rather simple, yet fun African themed online slot game with their Respin Rhino title.

The graphics and visuals provide a nice touch with the animations involved, whilst the respin feature certainly helps to provide some rather lucrative rewards when players are fortunate enough to trigger them.