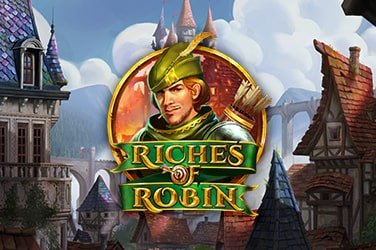 If there was ever a hero who symbolised what slots gaming is all about, surely it’s the infamous original man in tights: Robin Hood. Taking from the rich to give to the poor, Robin was all about taking chances with great skill in order to grab a bit of cash for the less fortunate, and that’s exactly what you get to do in this Robin themed slot game. With some great visuals and some fun mechanics, not to mention great prizes on this slot, there’s an adventure to be had. So will you win the fair maiden, or rot in the castle dungeon? Let’s take a look!

Developed by well-known developers Play’n Go, Riches Robin slot game is another of their big-budget titles that benefit from top quality sound, visuals and animation to really bring this video slot game to life. The theme is very typical, featuring Sherwood Forest and a medieval streetscape complete with thatched cottages, mazy tiled roofs and a looming castle in the background. The animations are what really bring this game to life, though, with just about every action and win accompanied by some movement. Whether it’s the characters: Maid Marian, Friar Tuck, Little John, Allan-a-Dale and Robin himself, or the little scenes that play out in the background during bonus rounds, it all adds to the fun.

In terms of the prizes, Riches of Robin slot game has quite a large range of bets, from 0.10 credits all the way to 100 credits, so there’s something for high and low rollers. While the layout is fairly standard, a 5×3 grid with 20 pay lines, the RTP works out at a generous 96.65%.

Alongside this main game, the major wins are to be had within the bonus rounds, which can be accessed by landing two types of symbols. Firstly, landing two archery targets will open up the free spins feature, which randomly selects both a number of free spins up to 20 and a multiplier on those spins up to 5x. Secondly, money bags of random quantities land regularly on the reels, adding small amounts of money to your kitty. Land four or more, though, and the Heist mini-game begins.

In this game, you get three free spins in which only the money bags are visible on the reels. Every money bag you land re-sets the spins, so you can keep spinning over and over until you miss out on a prize three times in a row. There’s also the chance of winning 1000 times your stake at once by landing a jackpot money bag, which you can also win in the base game too.

The result of all this is a slot game that has high variance and is pretty reliant on your luck with the randomly decided elements of the game. While the base game of the Riches of Robin slot has the potential for decent wins, if you end up hitting some big multipliers in the bonus rounds or some lucky money bags in the heist feature, you can significantly upgrade your winnings to truly massive jackpots.

At Las Vegas Casino you can find a wide range of the best online slot games available. Visit our slot games page and get ready for an online casino experience like you would have in Vegas.